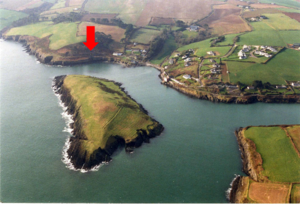 Sandycove Island is a small island at the mouth of Ardkilly Creek on the south coast of Ireland, just to the west of the Castlepark peninsula, which forms the western side of the entrance to Kinsale harbour in County Cork. It is a popular open water swimming location and site of the Cork Distance Week produced by Ned Denison.

It is located directly opposite the tiny hamlet of Sandycove (population around 100) and no more than 200 meters (656 ft) off the shore.

The island is uninhabited except for a herd of feral goats which has grazed on the island for generations, an indication that there is probably a reliable source of fresh water on the island. Over the centuries a number of ships have foundered on the rocks off the island, including the 147-ton brig Eliza which went aground on the island in 1826.

The Sandycove Island Swimmers have been Ireland’s most productive and inspiring marathon swimming location since 2005. Prior to 2005 there were only 13 marathon swims recorded by County Cork swimmers: River Lee 1973 to County Hall, 1987 Blackrock to Cobh plus 1999-2003 three swims across Clew Bay. In 2004 fourteen Sandycove Island swimmers signed up for English Channel solos and two-way relays. They were all successful and the local marathon swimming craze took hold.

From 2005 to 2012 an annual marathon dinner was held – drawing EC soloers from around Ireland. It helped set the stage for the annual ILDSA awards event. In 2013 the Global Open Water Swimming Conference and International Marathon Swimming Hall of Fame Induction/Awards Dinner was held in Cork. It was the most successful IMSHOF event and the organizers were awarded the Poseidon Award by the International Swimming Hall of Fame. 2018 saw the tenth year of the Cork Distance Week. This attracts more than 80 proven and aspiring marathoners from around the world for 9 days of intensive training. For the past few years this is combined with The Triple Crown dinner – with 93 attendees honoring this rare accomplishment – with many being further inspired.

The number of swimmers (as of 2018) from around the world who have completed a lap of Sandycove Island: 153 EC soloers, 32 Triple Crowners, 11 IMSHOF Honorees and 3 Oceans Seven (of 9 globally).

Sandycove Island swimmers have completed 104 solos on 20 km and above: 73 in salt water including 19 one-way English Channel solos and 21 in freshwater. The list above does not include the solos between 10 km and 20 km and many relays. The Sandycove Swimmers have travelled the global and put marathon swimming in Ireland on the map!

The organisation of the Sandycove Island swimmers is complex and loose. The Sandycove Island Swim Club provides some structure but swimmers from local masters clubs as well as swimmers from the rest of Ireland and abroad are welcome. Our members are the leading organizers, record keepers, swim gear producers (example free “Cork Marathon Swimmer” caps and have assisted groups in Myrtleville and Lough Ine without rancor.

The records now show 149 marathon swimmers from County Cork: 36 completed 25 km and above, 55 completed 10 miles to 25 km and 149 completed 10 km to 10 miles. This explosion and success has been led by the Sandycove Island swimmers who complete marathons regularly, inspire and help.

Finally, many of the swimmers raised money for local charities during their marathon swims.

The Sandycove Island Challenge is an open water swimming race held annually since 1994. The course is from the slipway at Sandycove on the mainland, around Sandycove Island and back to the slipway. The total distance is approximately 1.6 km. If sea conditions are unsuitable on the day, a more sheltered course is followed. It is also the site of the Irish Champion of Champions marathon swimming event and is named as one of the World's Top 100 Open Water Swims and one of the World's Top 100 Island Swims by the World Open Water Swimming Association.

The Cork Distance Week (Distance Training Week) is a marathon swimming preparation camp designed and led by International Marathon Swimming Hall of Fame Honour Administrator Ned Denison of Ireland. Held in Sandycove Island in Cork, Ireland as its base, the training camp lays the groundwork to high mileage and significant psychological stress with the goal to help its participants achieve their marathon swimming and channel swimming goals.

Around Sandycove Island, the waters are in the 10-13°C (50-55°F) range, rarely calm and the swimmers have just endured their toughest 8 days of cold open water training of their lives. They leave with a sense of confidence that can see them through their future plans.