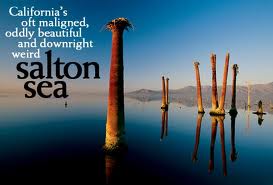 One of the world's largest inland seas and lowest spots on earth at -227 feet below sea level, Salton Sea was re-created in 1905 when high spring flooding on the Colorado River crashed the canal gates leading into the developing Imperial Valley. For the next 18 months the entire volume of the Colorado River rushed downward into the Salton Trough. By the time engineers were finally able to stop the breaching water in 1907, the Salton Sea had been born at 45 miles long and 20 miles wide – equaling about 130 miles of shoreline.

Salton Sea State Recreation Area covers 14 miles of the northeastern shore and has long been a popular site for campers, boaters and anglers. Increasing salinity in the Salton Sea basin has limited the number of types of fish that can be found there, and most fish currently caught are Tilapia. Varner Harbor within the Salton Sea State Recreation Area provides easy access to the sea for boating and water skiing. Kayakers, campers, birdwatchers, photographers and hikers can enjoy the site's many recreation opportunities.

Crossings of the Salton Sea by professional marathon swimmers occurred frequently in the 1950's and 1960's including a 17-hour double crossing by Dr. Wilfred Slater that was later broken by Amy Hiland in May 1956 in 14 hours 57 minutes.