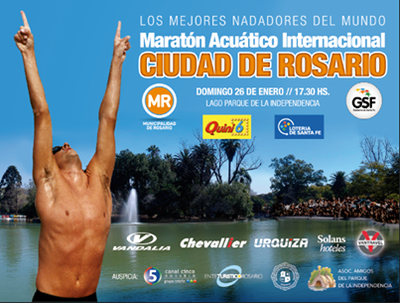 Rosario is the largest city in the province of Santa Fe, in central Argentina. It is located 300 km (185 miles) northwest of Buenos Aires, on the western shore of the Paraná River. Rosario is the third most populous city in the country, and also the most populous non-capital city in Argentina, with a growing and important metropolitan area; Greater Rosario has an estimated population of 1,276,000 as of 2012.

The Rosario-Victoria Bridge, opened in 2004, spans the Paraná River, connecting Rosario with the city of Victoria, across the Paraná Delta.

It is site of the Maratón Acuática Internactional Ciudad de Rosario, the kick-off event for the FINA Open Water Swimming Grand Prix. The 15 km competition around a triangular course is held at Rambla Catalunya Beach in Rosario.