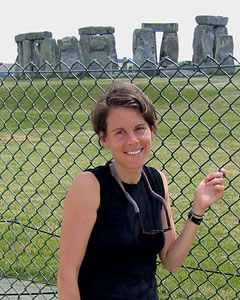 Dr. Rondi Davies is an accomplished marathon swimmer, American record holder for the fastest time around Manhattan Island (5:44:47) for a woman and a postdoctoral research scientist and geologist in the Department of Earth and Planetary Sciences at the American Museum of Natural History. She also co-founded the 8 Bridges Hudson River Swim with David Barra and was the only person besides Grace van der Byl to finish each of the 7 stage swims of the 2012 8 Bridges Hudson River Swim.

Dr. Davies grew up in Papua New Guinea. At the age of 11, her family moved back to their native Australia and she attended high school in Canberra.

"Growing up in Papua New Guinea was really great. It was in the tropics, we were outdoors all the time, we didn’t have television, and we swam constantly. Everything centered around the ocean," recalled Dr. Davies.

She was nominated for the 2018 World Open Water Swimming Woman of the Year by the World Open Water Swimming Association: Dr. Rondi Davies is an accomplished marathon swimmer who holds the women's record around Manhattan Island (5 hours 44 minutes). She and David Barra and Alex Arévalo manage New York Open Water and its 20 event days when the 2 Bridges Swim, 8 Bridges Hudson River Swim, 20 Bridges Manhattan Island Swim, 40 Bridges Swim, Spuyten Duyvil 10K, Ederle Burke Swim, and Terry Laughlin Celebration Swim are held. Davies handles the micro and macro details of these events behind the scenes from choosing dates to modeling each circumnavigation and river swim, securing permits, coordinating volunteers, and innumerable other responsibilities. She spends every event day on the water keeping trackers running and recording data and is always looking to improve on the accuracy of the event timelines. For utilizing her disciplined, scientific mind to enable and organize smoothly run, professionally managed events, for tirelessly ensuring that each swimmer has an enjoyable, safe experience, for utilizing her own personal successes to replicate similar successful swims by hundreds of other swimmers in the New York Open Water calendar, Dr. Rondi Davies of the USA is a worthy nominee for the 2018 World Open Water Swimming Woman of the Year.