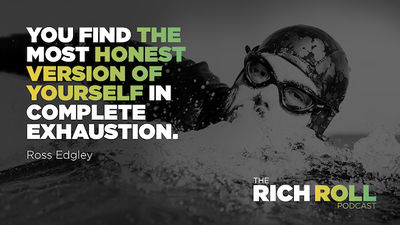 Rich Roll is a 50-year-old American endurance athlete, former competitive swimmer, and a graduate of Stanford University and the Cornell Law School.

Roll is a vegan endurance athlete and former entertainment attorney who is now a wellness and plant-based nutrition advocate, public speaker, husband, father of four, and an inspiration to people worldwide as a transformative example of courageous and healthy living.

In 2012, Roll became a #1 bestselling author with the publication of his inspirational memoir Finding Ultra: Rejecting Middle Age, Becoming One of the World’s Fittest Men, and Discovering Myself. Taking up where the book leaves off, in 2013 Roll launched the wildly popular Rich Roll Podcast, which persistently sits atop the iTunes Top 10 lists. In 2014, he and his wife Julie Piatt published the bestselling cookbook and lifestyle primer, The Plantpower Way: Whole Food Plant-Based Recipes And Guidance For The Whole Family.

In May 2010, Roll and Jason Lester accomplished the EPIC5 Challenge, an odyssey that entailed completing 5 Ironman-distance triathlons on 5 islands of Hawaii in 5 days. Commencing on Kauai, they travelled to Oahu, Molokai and Maui before finishing on the Big Island, following the course of the Ironman World Championships on the Kona coast.