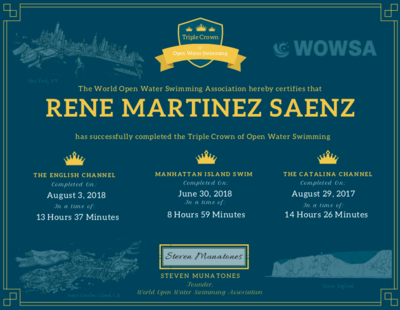 Rene Martínez Saenz will participate in the 2017 Pan-American Colibrí Swim between Imperial Beach, California, USA and Playas de Tijuana in Tijuana, Mexico is a cross-border swim and example of Speedo diplomacy by a group of ocean swimmers from five nations with the purpose to raise awareness and funds for the Colibri Center for Human Rights in the Pacific Ocean

México Pelágico is a Mexican documentary film on shark conservation and the title of a Spanish-language book of marine life in Mexico, produced by Pelagic Life where Rene Martínez Saenz is an associate.