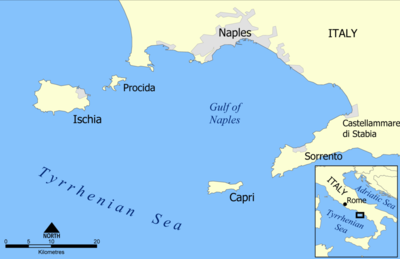 Procida is one of the Flegrean Islands off the coast of Naples in southern Italy. The island is between Cape Miseno and the island of Ischia. With its tiny satellite island of Vivara, it is a comune of the Metropolitan City of Naples, in the region of Campania. The population is about ten thousand.

Albert Coward pioneered several swims in the Gulf of Naples including a swim from the Isle of Procida to the mainland of Italy.