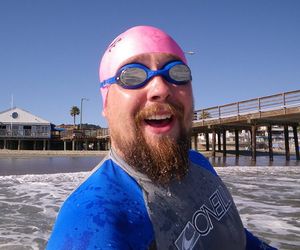 The race director and sole competitor in the inaugural marathon swim was Rob Dumouchel of Rob Aquatics.

Rob Aquatics was started by Rob Dumouchel as just a swim blog to keep him motivated to train back in 2008. Rob Aquatics grew out of a love of the water, especially the ocean, and the need to share that with the rest of the world. First through words, then through pictures, and now through direct action in the ocean.