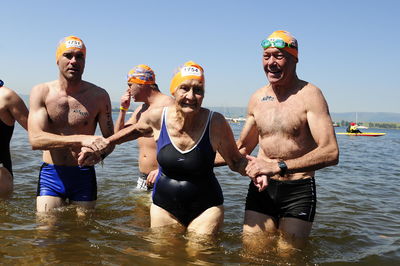 Chad Ho winning one of his five consecutive races at the aQuellé Midmar Mile in Pietermaritzburg, South Africa. Photo by Darren Goddard of Cychomedia

Pietermaritzburg is the capital and second largest city in the province of KwaZulu-Natal, South Africa. It is the site of the Midmar Mile, the largest competitive open water swimming event in the world.

It was founded in 1838, and is currently governed by the Msunduzi Local Municipality. Pietermaritzburg is popularly called Maritzburg in English and Zulu alike, and often informally abbreviated to PMB. It is a regionally important industrial hub, producing aluminium, timber and dairy products. It is home to many schools and tertiary education institutions, including a campus of the University of KwaZulu-Natal. It had a population of 228,549 in 1991; the estimated current population is around 500,000 (including neighbouring townships) and has one of the largest populations of Indian South Africans in South Africa.