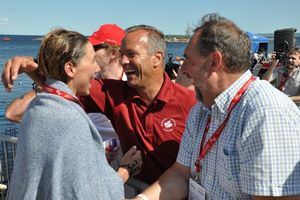 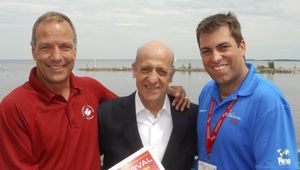 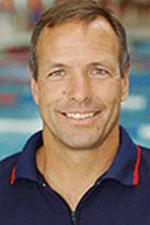 Pierre Lafontaine was the former CEO and National Coach for Swimming Canada between 2005-2013. He is currently the Chief Executive Officer of the Canadian Interuniversity Sport, the national governing body of university sports in Canada.

Lafontaine was nominated for the 2012 World Open Water Swimming Man of the Year award. His nomination reads,

He saw the future and helped make it happen. Not only did he corral the resources and utilize them appropriately, but he also very importantly, created the winning mindset and a world-class ambiance that has helped kick-start a resurgence in open water swimming in Canada. His belief in his coaches, his support for his athletes and professional marathon swims, and his high-energy excitement has made an entire generation of athletes and coaches believe international success and reaching their maximum potential is at hand. His leadership resulted in a bronze medal finish in the Olympic 10K Marathon Swim by Richard Weinberger at the 2012 Olympics, a silver medal by Ryan Cochrane in the 1500m, and a marvelously organized World Junior Open Water Swimming Championships held in Ontario. For being the most supportive administrator of open water swimming in the FINA Family, for his boundless enthusiasm that uplifts an entire generation of young swimmers, for his leadership in hosting the World Junior Championships, Pierre Lafontaine is a worthy nominee for the 2012 WOWSA Open Water Swimming Man of the Year.