Pianosa is part of the Prison Island Swims (or the Triple Break or Triple Crown of Prison Island Swims that were nominated for the 2016 WOWSA Awards, a recognition of outstanding men, women, performances and offerings around the globe sponsored by the World Open Water Swimming Association in the category of World Open Water Swimming Offering of the Year 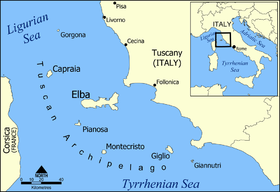 Isola di Pianosa (French: île de Pianosa or Pianosa) forms part of Italy's Tuscan Archipelago. Its name comes from the Italian pianura (plain). Its highest point stands 22 m (72 ft) above sea level. Pianosa was the site of a maximum-security prison (1858–1998), in later years holding especially dangerous Mafia criminals, although the island is not now inhabited for the whole year.

It is part of the Arcipelago Toscano National Park. It is a Marine Protected Area — no fishing, diving, or anchoring is allowed without special permit. During the tourist season it is connected by boat to Elba.