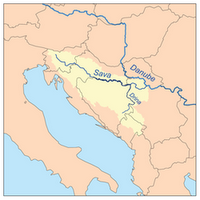 The International Jarak-Šabac Marathon Swim is formally known as the Plivački maraton Jarak-Šabac ("Peace Race"), a professional 19 km marathon swimming competition that was previously on the FINA Open Water Swimming Grand Prix circuit. The race is held in the Sava River in Šabac, Serbia. The race heads from Jarak (Јарак), a town of 2,200 people, to Šabac.

Serbian Swimming Federation and organizer City Of Sabac under the direction of representative Vojislav Mijic.

History of the Jarak-Šabac Marathon Swim

The Jarak-Šabac Marathon Swim (Medunarodni Plivački Maraton) is a 19 km race in Serbia organized by Serbia's Vojislav Mijić whose tireless efforts year after year are worthy for a nomination for the 2010 World Open Water Swimming Performance of the Year.

The race along the river Sava is the distance between village Jarak in Srem and city of Sabac at the beach “Stari grad”. A marathon run has been held in memory of 'the Blood march when 4,500 Šabac citizens in 1941 were forced under the threat of death to run 22K from Šabac to a German camp in Jarak. Anyone who couldn’t run was shot. Many prisoners survived thanks to people of the village Jarak which gave them water and bread. By helping they risked their own lives.

To show their gratitude, citizens of Šabac built a memorial drinking fountain at the entrance in the village with inscription: 'For love, for brotherhood, for water'. Milorad Rajšić was the pioneer of this race who worked long and hard to create an event that draws international competitors from around the world.

In 1982, the distance was set at 18.8 km. In 1987, the local tourist association started to organize the marathon. Then came the years of international sanctions and war, but the marathon continued to exist during 1991 to 1994 and continues to prosper to this day.

Winners of the Jarak-Šabac Marathon Swim