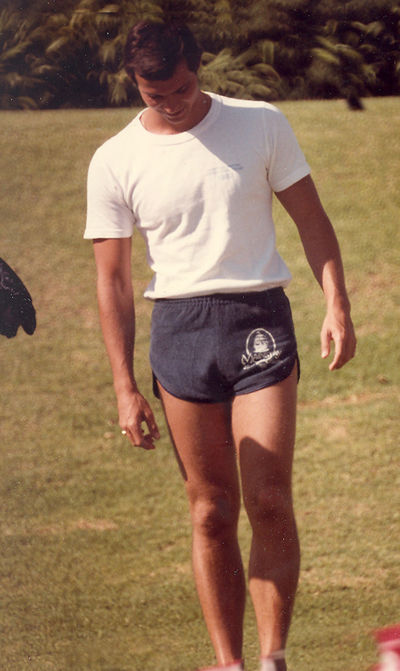 Paul Blackbeard (born in Durban on 19 February 1958 is a 63-year-old open water swimmer. He was an accomplished competitive swimmer who held numerous South African records, but was never able to participate in the Olympics. He was a member of the Queens Park Amateur Swimming Club. He competes in masters pool swimming, open water racing, pool and surf lifesaving. He sails, he swims the Rottnest Channel Swim each year, he holds Triple Springbok Colours. Born in Zambia, he was raised in South Africa and resides in Perth, Australia. He founded the South African Masters Swimming Association at the age of 25.

He represented South Africa at surf lifesaving and still-water lifesaving to become a triple Springbok, representing his country in 3 separate sports. He received an honorary life membership from the Queen Park Club in 1975. He was the world surf race champion (age 50-54) and won numerous national and international surf race titles. He set the Masters World Record for the 200m Obstacle race (a pool lifesaving event).This was an event where, 38 years earlier he had broken the open world record in Barcelona, Spain. He was awarded the State President’s Award for this result.

At 25, Blackbeard started the masters swimming organisation in South Africa. At the 10th FINA World Masters Swimming Championships in Perth, Paul won the title of World Champion for the 100m butterfly.

Blackbeard won the Midmar Mile in 1977 and won numerous times the 3.5 km Mainstay Swim from Pirates to South Beach with a compulsory stop at North Beach. He competed in the Red House River Mile in Port Elizabeth and the Robben Island relay event. He competed in the Rottnest Channel Swim in Perth, Australia finishing 7th position at the age of 52 training under Shelley Taylor-Smith. He won the overall duo category and mixed team category in subsequent years at Rotto and finished third at the 2014 Rottnest Channel Swim behind two under-30 year olds.

At the age of 53 on 4 October 2011, Blackbeard won the Circle of Valour award for sport.

Blackbeard owns a management consulting business (Argil) in Australia, which is focused on Southeast Asia. He worked for 34 years in the corporate world in Africa, Europe, America and Asia and after 'retiring' at age 50 and going sailing for a few years, he missed the intellectual stimulation of business so started his own.