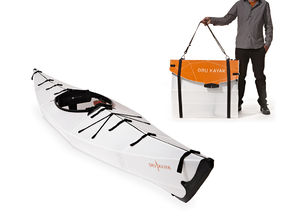 noun - Oru Kayak is a company that specializes in the design and distribution of foldable kayaks. Co-founded by kayaker Anton Willis, the initial designs were inspired by origami or the traditional Japanese art of folding paper. Together with Ardy Sobhani, the two launched Oru Kayak, the origami kayak.

The company was funded by crowd funding via Kickstarter in 35 days.

Oru Kayak's products were nominated for the 2013 World Open Water Swimming Offering of the Year award. Its nomination read,

Inspired by origami, the traditional Japanese art of paper folding, Oru Kayak is a brilliantly simple, foldable, watertight kayak that folds into a carrying case. The innovation created by Anton Willis and Ardy Sobhani solves a huge issue for open water swimmers who wish to swim with an escort in far-away places...or even in waters near their home. Stash it in a trunk. Check it on a plane. Stow it on an escort boat. The Oru Kayak can be taken to and used in remote bodies of water, enabling coaches to engage with their swimmers instead of standing on shore. For its portability and compactness, for its innovative form factor that makes escorting simple, easy, and accessible, for its myriad uses to provide safety and navigation in the open water swimming world, the Oru Kayak is a worthy nominee for the 2013 World Open Water Swimming Offering of the Year.