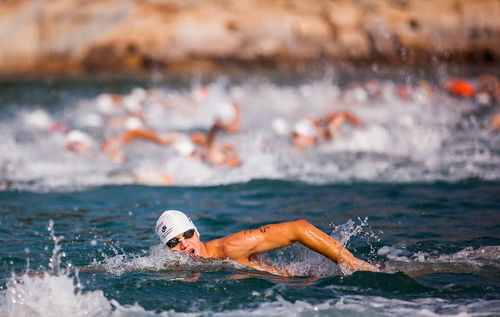 For a competitive swimmer to be in a position between packs in no man's land swimming solo, it is difficult because the swimmer cannot draft off of the faster pack and is at a disadvantage vis-a-vis the slower pack.

The term was originally used to define a contested territory or a dumping ground for refuse between fiefdoms. It is most commonly associated with the First World War to describe the area of land between two enemy trenches to which neither side wished to move openly or to seize due to fear of being attacked by the enemy in the process.

The Oxford English Dictionary contains a reference to the term dating back to 1320, and spelt nonesmanneslond, when the term was used to describe a disputed territory or one over which there was legal disagreement.