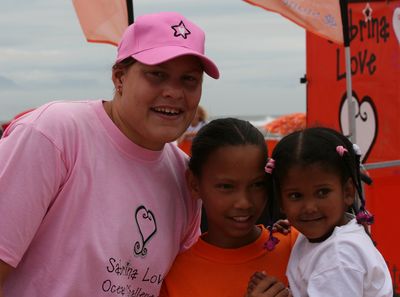 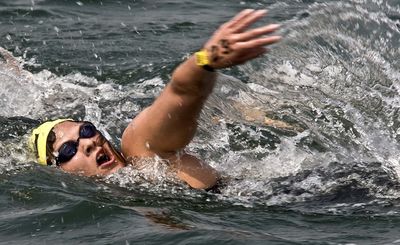 Natalie du Toit, a finalist in the Olympic 10K Marathon Swim at the 2008 Beijing Olympic Games

du Toit was born in Cape Town, South Africa and attended Wynberg Girls' High School. She began competing internationally in swimming at the age of 14. In February 2001 her left leg was amputated at the knee after she was hit by a car while riding her scooter back to school after swimming practice. Three months later, before she had started walking again, she was back in the pool with the intention of competing in the 2002 Commonwealth Games. Du Toit swims without the aid of a prosthetic limb.

She completed her scholastic education at the Reddam House in Cape Town after which she studied for a Bachelor degree at the University of Cape Town, specializing in genetics and physiology. In her free time she does motivational speaking.

du Toit first competed internationally at the age of 14, when she took part in the 1998 Commonwealth Games in Kuala Lumpur. During the 2002 Commonwealth Games in Manchester, du Toit, who was then 18 years old, won both the multi-disability 50 m freestyle and the multi-disability 100 m freestyle in world record time. She also made sporting history by qualifying for the 800 m able-bodied freestyle final - the first time that an athlete with a disability had qualified for the final of an able-bodied event. At the closing of the Manchester Commonwealth Games, she was presented with the first David Dixon Award for Outstanding Athlete of the Games.

She narrowly missed qualifying for the Olympic Games in Athens in 2004, but during the Paralympics that were held in the same city, she won one silver and five gold medals. In the same year, her courage and achievements were acknowledged with a nomination for the Laureus World Sports Awards of the Year 2004 with Disability Award. At the 2006 Commonwealth Games she repeated her previous performance by winning the same two golds as she had in Manchester. In 2006 du Toit won six gold medals at the fourth IPC World Swimming Championships.

On 3 May 2008, du Toit dramatically qualified for the 2008 Beijing Olympics after finishing fourth in the 10 km marathon swim at the 2008 FINA World Open Water Swimming Championships in Sevilla, Spain. Her time was only 5.1 seconds off the winner in a race that made its first Olympic appearance in Beijing. She also took part in the 2008 Summer Paralympics, winning 5 gold medals.

Du Toit was presented with the first David Dixon award for the Outstanding Athlete of the 2008 Beijing Olympic Games at the closing ceremony. She carried the South African flag at the opening ceremonies of the Olympic and Paralympic Games, making her the only person in history to have carried her country's flag at both events.

After the 2008 Paralympics she was awarded the Whang Youn Dai Achievement Award, which is presented at every Paralympic Games to one male and one female who best exemplifies the spirit of the Games and inspires and excites the world. Also in 2008, she received the International Association for Human Values (IAHV) Youth Leadership Award at the European Parliament in Brussels.

In 2009, Du Toit was presented with the Order of Ikhamanga in gold by President Jacob Zuma. The award is made to South Africans who have excelled in the fields of arts, culture, literature, music, journalism, and sport. Gold is the highest level, followed by silver and bronze.

In 2010, she was named the Laureus World Sportsperson of the Year with a Disability.

In 2013, she received an honorary MBE awarded by His Royal Highness The Earl of Wessex at a ceremony in Pretoria in October.

She was named to the list of 2015 World's 50 Most Adventurous Open Water Women by the World Open Water Swimming Association.

She was named to the list of 2017 World's 50 Most Adventurous Open Water Women by the World Open Water Swimming Association. The women are listed below, alphabetically by last name: