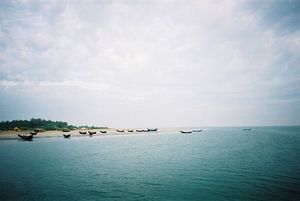 Narikel Zinjira or St. Martin Island) is a small island in the northeastern part of the Bay of Bengal, about 9 km south of the tip of the Cox's Bazar-Teknaf peninsula, and forming the southernmost part of Bangladesh. It is about 8 km west of the northwest coast of Myanmar, at the mouth of the Naf River. The local name of the island is "Narical Gingira", also spelled "Narikel Jinjira/Jinjera", translated from Bangla, meaning 'Coconut Island'. It is the only coral island in Bangladesh.

Most of the island's 5500 inhabitants live primarily from fishing. Besides, the other staple crops are rice and coconut. Being very common in the island, Algae is collected, then dried and finally exported to Myanmar. Between October and April, the fishermen from neighbouring areas bring their caught fishes to the island's temporary wholesale market. As the centre and the south are mainly farmland and makeshift huts, most of the strenuous things are around the far north of the island.

There are no taxis or electricity on St. Martin's Island. Except for the larger hotels that run on generators, there is no electricity supply. The island is all about sun, sea and palm trees. During the day, the island comes alive with water and beach sports, with beach parties and bonfires lighting up the evening skies.

St. Martin's Island is a popular tourist spot. Currently, five shipping liners run daily trips to the island, including Shahid Sher Niabat, L T Kutubdia, Eagle, Keary Cruise & Dine and Keary-Sindbad. Tourists can book their trip either from Chittagong or from Cox's Bazar. The surrounding coral reef of the island has an extension named Chera Dwip.

In the past 5 years St. Martin's visitor population has increased dramatically. While this situation has proven to be lucrative for the islanders, it is causing the natural beauty of the island to deteriorate. Presently there are many efforts being put forth to preserve the several endangered species of turtles that nest on the island, as well as the corals, some of which are found only on Narikel Jinjera. Pieces of the coral reef are being removed in order to be sold to tourists. Nesting turtles are sometimes taken for food, and their hatchlings are often distracted by the twinkling lights along the beach. Species of fish, a few just recently discovered, are being over-fished. Every year the fishermen must venture further out to sea to get their catch. Most of them use motorless boats.

It's possible to walk around the island in a day because it measures only 8 km2 (3 square miles), shrinking to about 5 km2 (2 square miles) during high tide. The island exists only because of its coral base, so removal of that coral risks erosion of the beaches. Sadly, St. Martin's has lost roughly 25% of its coral reef in the past 7 years.