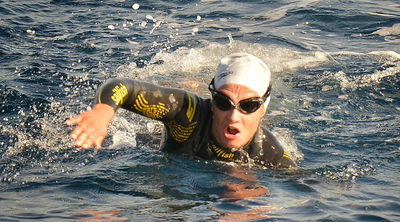 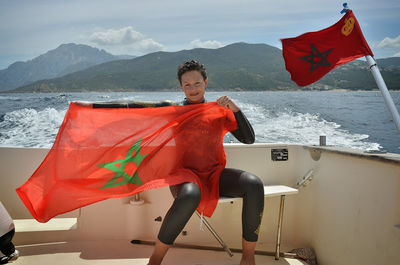 Nadia El Bahtane after crossing the Strait of Gibraltar in 2015 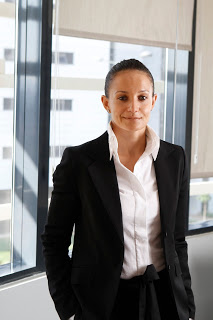 On 21 April 2015, she was awarded with the Royal Wissam (Wissam of Al Mukafaa Al Watania of 3rd class, officer) by His Majesty the King Mohamed VI during the banquet he chaired at the Marshan Palace in Tangiers on the occasion of Sovereign's 52nd anniversary. HM The King Mohammed VI awards royal Wissams to figures in the art and sport for their contribution and achievements in these areas during Youth day that corresponds to The Sovereign’s birthday.

WOWSA Woman of the Year Nomination

Nadia was nominated for the 2013 World Open Water Swimming Woman of the Year. Her nomination reads:

She lives in a land where open water swimming is still unknown. But Nadia Ben Bahtane has a dream to be the first working mother from Morocco to swim across the Strait of Gibraltar. With maternal responsibilities for her two children and professional responsibilities with her full-time marketing director position, she quietly goes about balancing her jobs at home, at work, and in the Mediterranean Sea. Day in and day out, even as she trains during Ramadan where she must fast 17 hours per day, she gives her all to family and work, with something left over for her swimming. For representing women who must balance everything without rest, for completing the Swim the Costa Brava 6 km as her first step towards completing the Strait of Gibraltar, for being focused on her swimming goals year-round, Nadia Ben Bahtane is a worthy nominee for the 2013 World Open Water Swimming Woman of the Year.