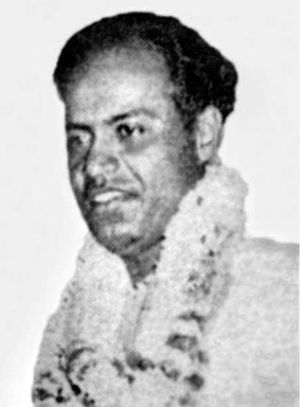 Murugapillai Navratnaswami (or spelled Murugupillai Navaratnasamy) (16 February 1909 - 1 January 1969) was a swimmer from Sri Lanka who first tried to swim 32 miles across the Palk Strait on 16 March 1954 from Valvettithurai (VVT) to Point Calimere in South India a distance of 32 miles, but had to abandon his swim due to the conditions. On 25 March 1954, Navaratnasamy made his second attempt starting at Valvettithurai at 4:10 pm and reached Point Calimere in South India at about 7 pm on 26 March 1954 for a time of 26 hours 50 minutes where more than 4000 Indians had gathered to greet his finish.

Navaratnasamy was much honored and celebrated due to his swim, but he died while training to do a circumnavigation of Sri Lanka, a distance of 760 miles, in a kattumaram.

His nephew, V.S. Kumar Anandan, also completed a swim from Valvettithurai to Point Calimere in 1963 that took 42 hours and a two-way crossing in 1974 in 51 hours.