(Redirected from Mouth of the Potomac) 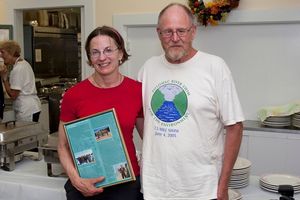 The swim began when distance swimmer Joe Stewart who uses distance swimming as a way to raise cash and visibility for charitable causes, embarked on a solo "Swim for the River's Sake," in 1993. The race began the following year. In 2001, Stewart announced that he was taking a break from race organizing, and handed the reins over to distance swimmer Cheryl Wagner.