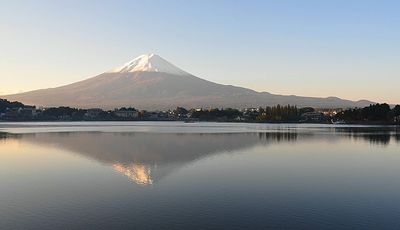 Mount Fuji (富士山 known as Fuji-san in Japan) is the highest mountain in Japan located on Honshu Island at 3,776.24 meters (12,389 feet). It is an active stratovolcano that last erupted in 1707–08. Mount Fuji is about 100 kilometers (62 miles) southwest of Tokyo and can be seen from there on a clear day.

Mount Fuji's exceptionally symmetrical cone, which is snow-capped several months a year, is a well-known symbol of Japan and it is frequently depicted in art and photographs, as well as visited by sightseers and climbers.

Five Lakes of Mount Fuji (or 富士五湖, 'Fuji-goko' in Japanese) is the name of the area and five lakes located at the base of Mount Fuji in the Yamanashi prefecture of Japan that is approximately 1,000 meters above sea level. The name comes from the five lakes formed by previous eruptions of Mount Fuji.

The five lakes are located in an arc around the northern half of Mount Fuji. In ancient times, lava flow from a volcanic eruption of Mount Fuji spread across the area, damming up rivers and resulting in the formation of these lakes. They are excellent tourist attractions and fishing spots.

Americans Lynne Cox and Steven Munatones have been the only individuals to cross the Five Lakes of Mount Fuji.

Lake Kawaguchi (河口湖 or 'Kawaguchi-ko') is the most famous of the five lakes, and images of this lake are usually used in posters and commercials. A large number of hotels line its banks, as do locals providing boat rides to the tourists. It is the only lake among the five lakes that has an island.

Lake Motosu (本栖湖 or 'Motosu-ko') is the ninth deepest lake of Japan, at 140 meters. This lake, along with Lake Sai and Lake Shoji, was formed by lava flowing across what is now Aokigahara Jukai Forest and into the enormous lake that once dominated the area, and these three lakes remain still connected by underground waterways.

Lake Sai (西湖 or 'Sai-ko') shares its banks with the Aokigahara Jukai Forest.

Lake Shoji (精進湖 or 'Shōji-ko') is the smallest of the five lakes where remnants of lava flow still jut out of the water.

Lake Yamanaka (山中湖 or 'Yamanaka-ko') is the easternmost and largest of the five lakes, and the third highest lake in Japan, standing at 980 meters above sea level.