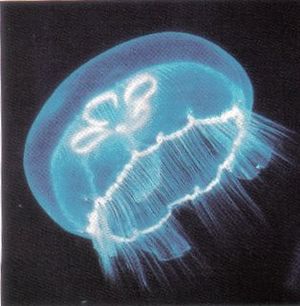 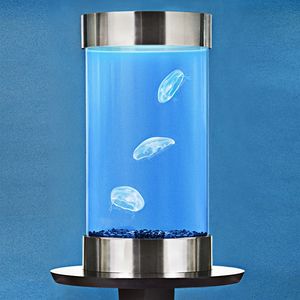 noun - Moon jellyfish (or Aurelia aurita, moon jelly, common jellyfish, saucer jelly) is one of a group of more than ten morphologically nearly identical jellyfish species in the genus Aurelia. In general, it is nearly impossible to identify Aurelia medusae without genetic sampling, so most of what follows about Aurelia aurita, could equally be applied to any species of the genus. The medusa is rompe translucent, usually about 25–40 cm in diameter, and can be recognized by its four horseshoe-shaped gonads that are easily seen through the top of the bell. It feeds by collecting medusae, plankton and mollusks with its mucusy bell nematocyst-laden tentacles and bringing the prey into its body for digestion, but is capable of only limited motion; like other jellies it primarily drifts with the current, even when it is swimming.

Genus Aurelia is found throughout most of the world's oceans, from the tropics to as far north as latitude 70°N and as far south as 40°S.[2] The species Aurelia aurita (moon jellyfish) is found along the eastern Atlantic coast of Northern Europe and the western Atlantic coast of North America in New England and Eastern Canada. In general, Aurelia is an inshore genus that can be found in estuaries and harbors. It lives in ocean water temperatures ranging from 6°C to 31°C; with optimum temperatures of 9°C to 19°C. Moon jellyfish prefers temperate seas with consistent currents.

They feed on plankton that includes organisms such as mollusks, crustaceans, tunicate larvae, rotifers, young polychaetes, protozoans, diatoms, eggs, fish eggs, and other small organisms. Occasionally, they are also seen feeding on gelatinous zooplankton such as hydromedusae and ctenophores. Both the adult medusae and larvae of Aurelia have nematocysts to capture prey and also to protect themselves from predators.

Aurelia aurita is known to be eaten by a wide variety of predators including the Ocean sunfish (Mola mola), the Leatherback sea turtle (Dermochelys coriacea), the scyphomedusa Phacellophora camtschatica, and a very large hydromedusa (Aequorea victoria).

Moon jellies are also fed upon by sea birds, which may be more interested in the amphipods and other small arthropods that frequent the bells of Aurelia, but in any case, birds do some substantial amount of damage to these jellyfish that often are found just at the surface of bays.

Moon Jellyfish in the Florida Keys[edit]