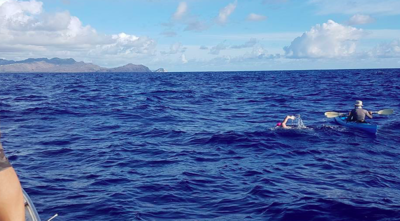 Moloka'i is called The Friendly Isle, the 5th largest Hawaiian Island at 38 miles (61 km) long by 10 miles (16 km) wide, and somewhat rectangular in shape. Moloka‘i has no fast food chains, high-rise buildings, shopping centers, movie theaters, or traffic signals and is located about 9 miles (14.5 km) northwest of Maui, 9 miles (14.5 km) north of Lāna‘i, and 22 miles (35 km) southeast from Oahu across the Kaiwi Channel.

The island of Molokai has the highest percentage of native Hawaiians of any of the Hawaiian Islands except Ni‘ihau. Much of Molokai’s relatively small population (less than 8,000 total) still clings largely to a subsistence lifestyle of farming, fishing, hunting, and gathering.

Moloka‘i was formed by Kauhakō and Kamakou Volcanoes, which originally created two separate islands. These two islands were joined when later lava flows formed the Ho‘olehua Plains. The island has vast amphitheater valleys and spectacular coral reefs. The sea cliffs along Moloka‘i’s northern shore have an average steepness of more than 55 degrees and rise to more than 3,300 feet (1,006 m), making them among the highest sea cliffs in the world.

The start of the Kaiwi Channel Swim is on Kepuhi Beach in Kepuhi Bay on the western shores of Molokai. Other start points include La'au Point or Kaluakoi Resort.