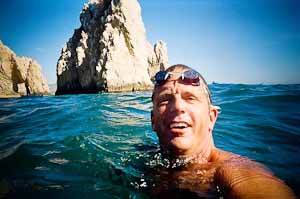 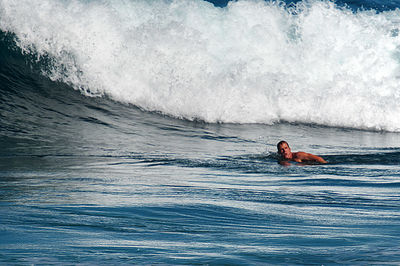 Mike Lewis in his element

Mike Lewis (born 27 April 1965) serves as a correspondent and photographer for SwimSwam and is a meet announcer for USA Swimming and U.S. Masters Swimming including the U.S. Open and the USA Swimming National Open Water Swimming Championships. He is also the principle for Ola Vista Photography.

He is a diverse waterman who was an ocean lifeguard on San Diego beaches for over 10 years and an entrepreneurial manager with the United States Olympic movement. He was the High Performance Director for the 2000 USA Olympic team (USA Canoe and Kayak) where was responsible for national team development and performance at World Cup events, World Championships and Pan American Games.

Lewis has notched top ranked finishes in several [[open water swimming[[ events throughout the world and was one of the first persons to cross Walloon Lake in northern Michigan. Mike is also active in United States Masters Swimming and has held numerous top ten rankings. He lives in La Jolla, California with his wife Cynthia Lewis and their dog Syd.

Lewis also served as the Public Relations chairman of the Pan American Canoe Federation and was a U.S. Olympic Committee Sport Partnership Manager responsible for numerous sports. Later, he was the Director of Sport Development for USA Water Polo where he oversaw the development of a comprehensive national coaching certification program and managed membership services. His tireless work ethic and focus on the athlete were reasons why he served on the U.S. Olympic Committee Coaching Education Task Force.

Administratively, Mike co-founded and served as the Executive Director of the Association of Collegiate Water Polo Coaches. He promoted the sport at the college and university level which led to unprecedented growth. Most recently, he served as the General Manager for the world-renowned Mission Viejo Nadadores swim team where he provided management oversight for all aspects of one of the world's largest swim clubs. He is graduate of University of California San Diego and a Masters Degree in Sport Psychology from San Diego State University, Mike's passion and commitment to open water swimming is evident in his continuing efforts to promote and build the sport at all levels.

Mike Lewis is an award winning photographer and operates Ola Vista Photography. His work has been featured in numerous publications both in domestically (USA) and international. He has become one of the most prolific swim photographers and his wide body of work encompasses sport, landscape, portraits and events. Mike is a freelance photographer with the Orange County Register and Zuma Press International.

Ola Vista Photography by Mike Lewis is nominated for the 2014 World Open Water Swimming Offering of the Year.

"Mike Lewis has an eye for photography that many companies, events, governing bodies and universities appreciate. From USA Swimming and the U.S. Olympic Committee to Stanford University to Yale and many of the major swimsuit manufacturers, Lewis understands motion and beauty above, on and under because he is a waterman himself. He not only catches those moments in competition that can tell a story by themselves, but he also creates award-winning images that showcase the power, grace and athleticism of swimmers in any aquatic environment, whether it is bodysurfing on a wave or diving in at the start. For his creativity in capturing beautifully energetic images, for presenting swimmers in a visually creative manner, for exposing swimmers in unique positions and conditions, Ola Vista Photography is a worthy nominee for the 2014 World Open Water Swimming Offering of the Year."