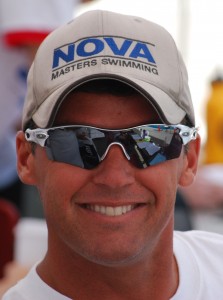 Mike Collins is the decorated head coach of the Irvine Novaquatics and an open water swimmer and triathlete. Collins has been the Nova Masters Head Head Coach since November 2000. Before that he coached at UCLA for four years and the Davis Aquatic Masters for 8 years. He has an extensive background in coaching swimmers and triathletes of all ages and abilities.

Additionally, Collins travels around the country to coach swimming, triathlon, and running clinics. Although his main background was in swimming, he has taken many of the concepts used in swimming technique, drills, and interval training and applied them to running and cycling as well.

Collins continues to compete in triathlons, running events, swimming events (both in the pool and open water), and road and mountain cycling. In triathlons he race from sprint to half Ironman distance. He often wins his age group and finishes as one of the top overall amateurs as well. He was the 2002 World Aquathlon amateur champion in Cancun (2.5K Run, 1K Swim, 2.5K Run).

In addition to coaching and racing, Collins is a well known author. His articles have appeared in SWIM magazine, Swimming Technique, TRIATHLETE magazine, Triathlon Today, American Swimming, and many other national publications.