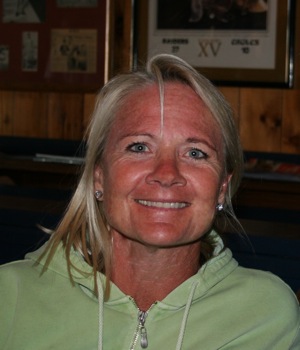 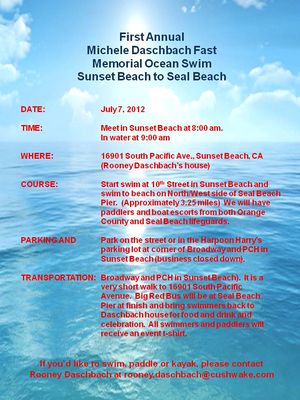 The Michele Fast Memorial Swim - Naples Island Swim is an open water swimming competition, formerly called the Naples Island Swim to be held on 11 August 2013. It is an open water swimming tribute to Michele Daschbach Fast who was killed by a mass murderer in a beauty salon in Seal Beach, Calfornia on 12 October 2011. The event is a swim in support of her favorite charity, the SmileTrain, on 7 July 2012 from Sunset Beach to Seal Beach.

It is organized in combination with the family-hosted, point-to-point memorial swim called the Michele Daschbach Fast Memorial Ocean Swim held from Sunset Beach to Seal Beach on 10 August 2013.

Fast grew up in Atherton in northern California the youngest of six children. The University of California Santa Barbara graduate met her husband Patrick in college and later moved to Seal Beach where they raised their 3 children: Patrick, a senior at UC Berkeley, Laura, a freshman at UCLA, and Lisa, a junior at Los Alamitos High School.

She swam every morning in Seal Beach, touching everyone she met in and out of the water with her smile, sense of humor, compassion and selfless perspective of life.

To carry on the traditional of the Naples Island Swim that has been going on since the 1960s and to honor the memory of Michele Daschbach Fast.

Donations can be made in Michele Fast's name to The SmileTrain, her preferred charity of choice.