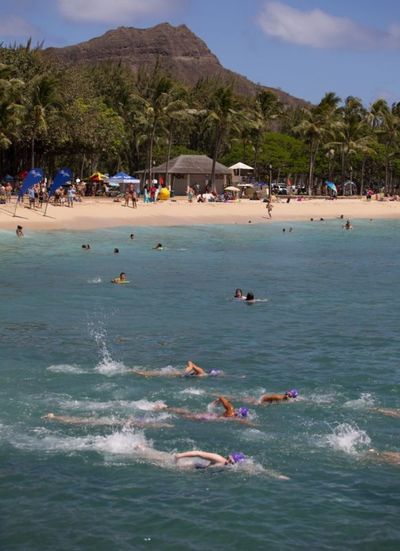 The Maui Jim South Shore Classic is a volcano swim and an ocean swimming competition on the South Shore of Oahu in the state of Hawaii organized by former professional triathlete and world-class marathon swimmer John Flanagan and runner Todd Iacovelli.

The event will offer 4 separate races: Men's Race, Women's Race, Keiki Race, and the Elite Race. All of the races will be run at separate times, so swimmers can also enjoy the other races. The race course is designed to maximize spectator potential while creating an exciting environment for swimmers of all levels.

The Men's and Women's race will be a 1-mile swim for ages 15 and up. The course will be set up with two 1/2-mile loops that include a 20-yard run on the beach between each. Racers will be sent out in waves with the oldest swimmers starting first, and the remaining age groups sent in waves following all the way to the youngest competitors. Awards will be given to the first 10 swimmers to cross the finish the line regardless of age. Swimmers will also be able to receive their own individual time for the mile race. Spectators will be able watch the race unfold on the wall at the Kapahulu Groin or sit on the beach and enjoy seeing the competitors at the start, the half way point, and the finish.

The Keiki race will be a half-mile swim for ages 14 and under. The race will be set up with two 1/4 mile loops that include a 20-yard run on the beach in between each. The youngest swimmers will be sent in the first wave with the remaining age groups sent from youngest to oldest. The first 10 swimmers to cross the finish line will win awards.

The Elite race will be a 2-mile swim. The course will be set up with four 1/2-mile loops that include a 20-yard run on the beach between each. Men and women will race together with the women competitors getting a head start. Awards will be given to the first 5 swimmers to cross the finish line regardless of sex.