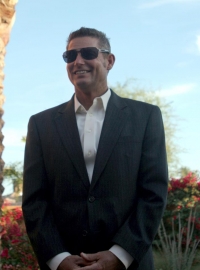 Mark Montgomery is the Xantusia Camp Host and Chief Storytelling Officer of Slowtwitch, one of the most highly trafficked multi-sport and endurance sports websites in the world. Slowtwitch is where athletes of all ages and abilities are constantly sharing stories, discussing workouts, meeting friends and learning new information online.

At the early age of 8 learned the rhythms of the ocean, and perfected his open water swim racing in the highly competitive lifeguard competitions. In the mid 1970's he began his multi-sport career in the lifeguard Ironman where he won the national bronze medal, and moved on to become one of the top professional triathletes in the world. Montgomery has raced in over 500 multi-sport events, as a professional has won over 60 of them. Since then has been virtually unbeatable as an age grouper. Montgomery continues to excel in the 55+ division, placing 5th at the masters swimming nationals this year in the most grueling event, the 400 individual medley. In addition to his unprecedented racing career, Montgomery also directed and promoted over 60 triathlons around the world. He has been inside and outside of top level events for over 30 years, and brings a unique perspective of both sides of the curtain in competitive sports.

He is also the lead safety officer of Paul Lundgren's attempt to swim across the Sea of Cortez in Mexico in June 2012.

Montomery's five-acre gentleman's ranch, adjacent to Dan Empfield's ranchette (the collection of properties is called "Xantusia"), is the place where visiting pro triathletes, workshop attendees, manufacturers and others headquarter themselves while on the property. "Monty's" job is to house, feed, and ride and run with with guests of Xantusia, and to continue his quest for the perfect margarita.

Monty began his multisport career in the early 1970's as a lifeguard working the beaches of Los Angeles County. His forte was the "Lifeguard Ironman" which included swimming, running, paddling, rowing, and kayaking. In 1978 he began training for his first triathlon and won his first 3 races. Since then Mark has over 60 multi-sport wins in over 400 races during a 15-year pro career as a triathlete and bike racer.

Montgomery has also worked "behind the camera" in triathlon, as promoter and race director of over 50 races, including the Los Angeles Triathlon Series (ongoing since 1982). He founded the Triaction Sports triathlon shop in the late 80's, which at the time was the shop to the stars and headquarters for the latest in new technology. He worked closely with Dan Empfield in designing the tri-specific bike and wetsuit.

Montgomery went back to work for the L.A. County Fire Department in 1994 as a full time lifeguard retiring in 2003. He had a pacemaker installed in 2001, and after 18 months of recovery got himself back in shape and qualified for the U.S. Worlds team in the 45+ age group. He competed on the U.S. team in both New Zealand and Portugal (World Championship sites for 2003 and 2004).