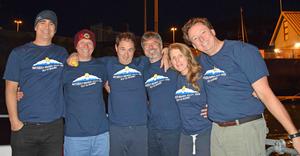 Mark Johansen is an English open water swimmer who completed an English Channel crossing in 2014 in 14 hours 8 minutes under the auspices of the Channel Swimming & Piloting Federation and will participate in the 28.5-mile (45.8 km) 20 Bridges Circumnavigation Swim of Manhattan in New York City held in 2017.

He leads a swim group known as the Frequent Flyers who specialize in marathon butterfly relay swims including the English Channel and Lake Geneva. The Frequent Flyers are a 6-person relay from Great Britain and Germany that attempted a 69 km (49 mile) all butterfly 6-person relay in Lake Geneva, Switzerland. They finished with an unratified time of 33 hours 34 minutes 9 seconds on 13-14 July 2016. The team consisted of Mark Johansen, Kevin Blick, Sam Mould, Robert Fisher, Rob Ouldcott, and Boris Mavra. Their unprecedented attempt using butterfly faced primal and dangerous conditions including predominant headwinds exceeding 32 knots. The relay decided to change to freestyle in the interests of safety after nearly 13 hours.