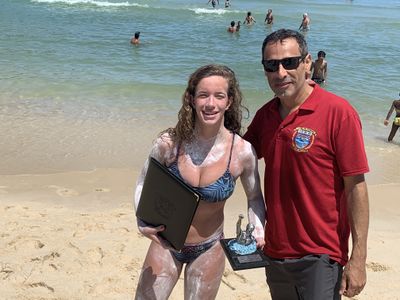 Mariana Chevalier Santos with Adherbal de Oliveira after her successful Travessia do Leme ao Pontal in Rio de Janeiro, Brazil that was selected as the World Open Water Swimming Performance of the Year in the 2020 WOWSA Awards 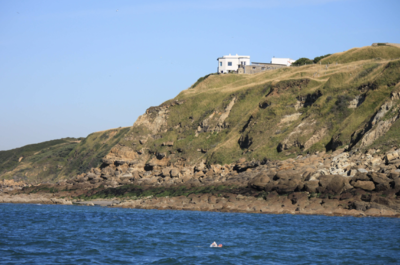 The Travessia do Leme ao Pontal by Mariana Chevalier was nominated for the 2020 WOWSA Awards in the World Open Water Swimming Performance of the Year category: Inspired by a famous Brazilian song Do Leme ao Pontal, the 36 km Travessia do Leme ao Pontal has become the most popular marathon swim in South America. Mariana Chevalier Santos, a 16-year-old competitive swimmer, set off at 2:02 am in March along the coast of Rio de Janeiro, Brazil on a starry night illuminated with a full moon, not fully knowing what to expect. As she swam along the edge of the well-lit municipality, Mariana became seasick – and stayed that way. But she forged on for a total of 9 hours 42 minutes, especially a fast last 10 km when she picked up her pace and kick. The beauty of the shoreline scenery helped her focus on her goal to become the youngest person to complete the Travessia. For her precocious sense of adventure, degree of tenacity, and abundance of perseverance on her first major marathon swim, for becoming the youngest successful swimmer of the Travessia do Leme ao Pontal swimming the third fastest time among women in history, and for utilizing this experience for a follow-up success in the English Channel four months later on a 11 hour 55 minute crossing, the record-setting Travessia do Leme ao Pontal by Mariana Chevalier Santos of Brazil is a worthy nominee for the 2020 World Open Water Swimming Performance of the Year.​​