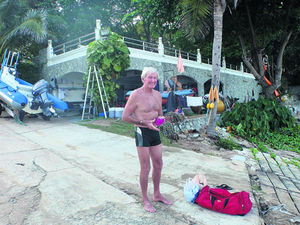 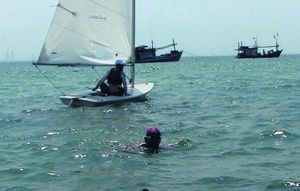 Malcolm Humphreys, a 75-year-old member of the Devizes Masters Swimming Club, set a world record in his swim across the 4.24 nautical mile (7.85 km) strait between the Royal Varuna Yacht Club to Koh Lan Island in Thailand. He was escorted by two boats during his unprecedented 2 hour 59 minute swim.

"It had never been done before but it looked so inviting. Gareth Owen, a former world champion catamaran sailor, became my mentor and it was his encouragement as much as anything that got me through it. I had a window of three hours to complete the swim before the next tide came through and I did it in two hours and 59 minutes. People are now talking about swimming out to the island as a challenge they have to take up, so I have achieved something at least.

At the age of 70, he swam two miles at the Isle of Wight to raise money for an Alzheimer’s charity.