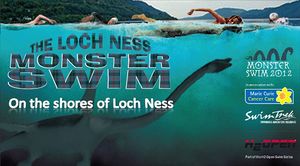 Loch Ness is one of a series of interconnected, murky bodies of water in Scotland; its water visibility is exceptionally low due to a high peat content in the surrounding soil. It is part of the Triple Crown of Lake Monster Swims.

Loch Ness is the second largest Scottish loch by surface area at 56.4 km2 (21.8 sq mi) after Loch Lomond, but due to its great depth, it is the largest by volume. It contains more fresh water than all the lakes in England and Wales combined, and is the largest body of water on the Great Glen Fault, which runs from Inverness in the north to Fort William in the south.