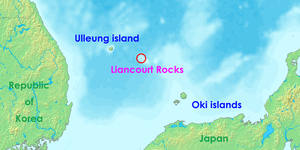 Liancourt Rocks is known as the Dokdo in Korean and Takeshima Island in Japanese. It consists of 2 main islets and 90 islets, rocks and reefs in the surrounding area. A total of 37 of these islets are recognized as permanent land.