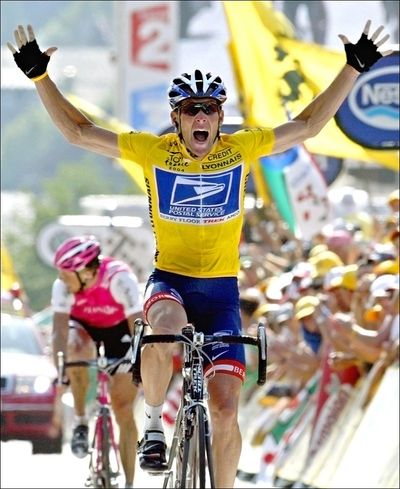 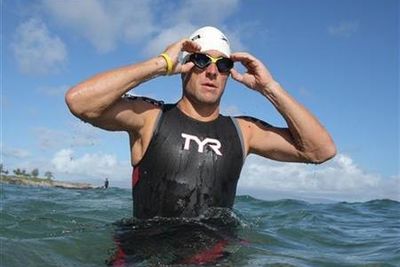 Lance Armstrong swimming in a triathlon

Lance Edward Armstrong (born Lance Edward Gunderson on 18 September 1971) is an American former professional road racing cyclist who is best known for winning the Tour de France a record seven consecutive times, after having survived testicular cancer. He is also the founder and chairman of the Lance Armstrong Foundation for cancer research and support. He last rode for (and helped found) UCI ProTeam Team RadioShack.

In October 1996 he was diagnosed as having testicular cancer, with a tumor that had metastasized to his brain and lungs. His cancer treatments included brain and testicular surgery and extensive chemotherapy, and his prognosis was originally poor. He went on to win the Tour de France each year from 1999 to 2005, and is the only person to win seven times, having broken the previous record of five wins, shared by Miguel Indurain, Bernard Hinault, Eddy Merckx, and Jacques Anquetil.

In 1999, he was named the ABC Wide World of Sports Athlete of the Year. In 2000 he won the Prince of Asturias Award in Sports. In 2002, Sports Illustrated magazine named him Sportsman of the Year. He was also named Associated Press Male Athlete of the Year for the years 2002–2005. He received ESPN's ESPY Award for Best Male Athlete in 2003, 2004, 2005, and 2006, and won the BBC Sports Personality of the Year Overseas Personality Award in 2003. Armstrong announced his retirement from racing on July 24, 2005, at the end of the 2005 Tour de France, but returned to competitive cycling in January 2009, and finished third in the 2009 Tour de France. He confirmed he had retired from competitive cycling for good on February 16, 2011.

He grew up in Texas. Football is a very popular sport in Texas. Lance wanted to be a football player but lacked the coordination. He felt very bad about this failure but didn't give up on sports. He decided to try swimming. As a fifth grader, Lance joined a swim club. Lance's swimming skills were very weak so he was put in a group with second graders. This was very embarrassing but he wanted to be successful and before long, he was put in his age group. Lance finally made the swim team and that was a lot of hard work. He had to practice swimming before and after school every day. His morning workout was from 5:30 AM until 7:00 AM. He rode 20 miles to swim practice on his bike before sunrise.

When Lance was thirteen years old he became a junior triathlon athlete. A triathlon is an event that combines swimming, biking and running. At age fifteen he entered triathlons to win money. He won so many races that he made $20,000 in one year.