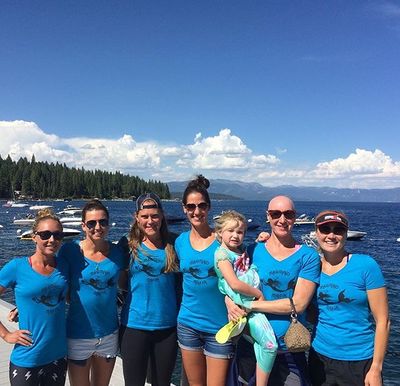 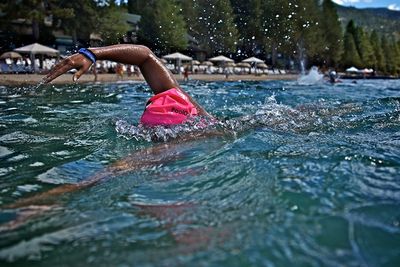 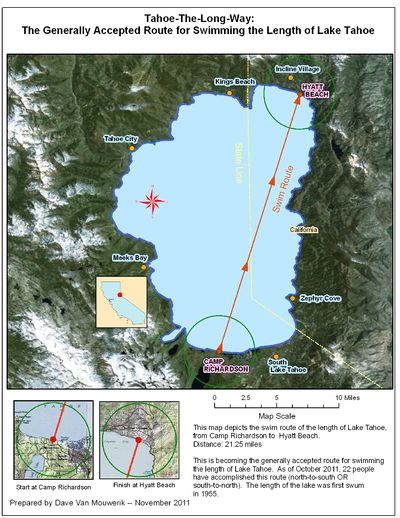 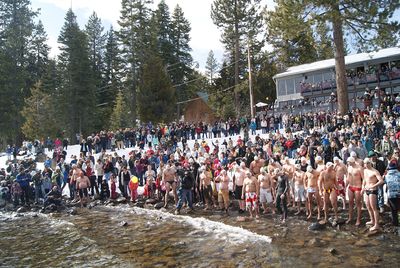 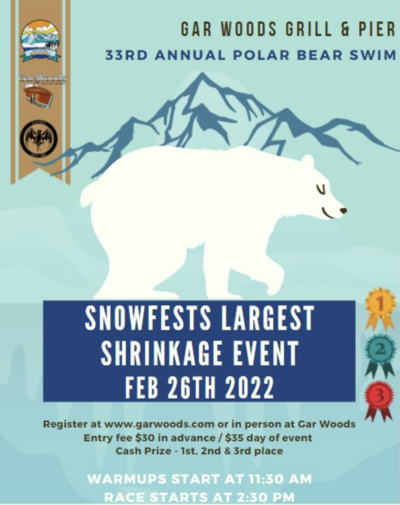 Lake Tahoe is a large freshwater lake in the Sierra Nevada range in the western United States and is part of the Still Water Eight and the Triple Crown of Lake Monster Swims. At a surface elevation of 6225 feet (1,896 meters), it is located along the border between California and Nevada, west of Carson City, Nevada.

It is the largest alpine lake in North America. Its depth is 1645 feet, making it the USA's second-deepest (the deepest is Crater Lake in Oregon). Additionally, Lake Tahoe is listed as the 26th largest lake by volume in the world. The lake was formed about 2 million years ago and is a part of the Lake Tahoe Basin with the modern lake being shaped during the ice ages. It is known for the clarity of its water and the panorama of surrounding mountains on all sides. The area surrounding the lake is also referred to as Lake Tahoe, or simply Tahoe.

Lake Tahoe is a major tourist attraction in both Nevada and California. It is home to a number of ski resorts, summer outdoor recreation, and tourist attractions. Snow and skiing are a significant part of the area's economy and reputation - and the water is usually considered cold or at least cool by most open water swimmers.

Approximately two-thirds of the shoreline is in California. The south shore is dominated by the lake's largest city, South Lake Tahoe, California, which adjoins the town of Stateline, Nevada, while Tahoe City, California, is located on the lake's northwest shore. Although highways run within sight of the lake shore for much of Tahoe's perimeter, many important parts of the shoreline now lie within state parks or are protected by the United States Forest Service.

In spite of land-use planning and export of treated sewage effluent from the basin, the lake is becoming increasingly eutrophic (having an excessive richness of nutrients), with primary productivity increasing by more than 5% annually, and clarity decreasing at an average rate of 0.25 meters per year.

Lake Tahoe is part of the Triple Crown of Lake Monster Swims or the cryptozoological Triple Crown.

It is part of the inaugural 2022 UltraMarathon Swim Series:

The Lake Tahoe Marathon Swim Federation is a governing and recording body to document marathon swim crossings of Lake Tahoe in California. It was co-founded by Dave Van Mouwerik, Dean Moser, and Tom Linthicum.

Lake Tahoe is part of the Stillwater 8, a solo marathon swimming challenge created by Michelle Macy:

This first-hand account of swimming the entire length of Lake Tahoe was written by Dave Van Mouwerik:

On August 14, 2011, I undertook a swim to cross Lake Tahoe in the south/north direction. Lake Tahoe is the largest alpine lake in North America, and this particular swim is an interstate (California and Nevada) swim. I wanted to swim the longest straight line that Lake Tahoe presented. To the best of my knowledge this longest straight line swim route was established in 2005 by Ken Harmon of Danville, California. Ken researched the previous swims of Lake Tahoe, and then he successfully swam the route that he identified as the longest straight line (e.g. from Camp Richardson in the south to Hyatt Beach in the north). Based on the historic swim records that he identified, it appears that I was the nineteenth person to swim “Tahoe-The-Long-Way”.

Many of the historic swims (the first one was accomplished in 1955 by Fred Rogers) followed various north/south routes, and these routes varied in length between 16 miles and 21 miles. Since Ken’s 2005 swim, it appears that subsequent swimmers have generally followed Ken’s route when swimming “Tahoe-The-Long-Way”. Based on this longest route, I was the ninth person to swim this distance. And rumor has it another attempt was made on August 24rd, and that yet another attempt will be made in early September. (I like the idea of being the ninth person, rather than the nineteenth person, because then I can say “hey, more people have walked on the moon than have swum the length of Lake Tahoe”….)

This swim was a great experience. The concerns I had about the swim, namely the elevation (over 6200 feet) and the cold water (lots of anecdotal and inaccurate information about how unbelievably cold this lake is) proved to have no real impact on my swim. I spent three days at the lake before the swim, and believe that I was mostly acclimatized to the elevation. Had I been involved in a sprint at a swim meet at this elevation, then, I think, the elevation would have affected my performance—but on a marathon swim….no problem. As far as the water temperature went, it held steady at 66 degrees for the duration of the swim. Wow! Balmy and excellent! When I stepped into the water at 4:00 am on Sunday morning, the air temperature was 52 degrees, and so the water felt warm when I entered it.

The first eight and a half hours were excellent—swimming under a full moon, exquisitely calm water, the escort boat running with no lights, the muted lights of glow sticks hanging off of the escorting paddleboard and (2) kayaks, watching the slow process of the sunrise off my right shoulder. Feedings happened easily and quickly; we were laying down some miles. I’d seen from internet weather reports the previous couple of days that there was some wind forecast for the late morning and the afternoon, and that it would be coming out of the southwest, so I was happy to be “making some hay” while the moon, and then the sun, shone.

Well, the winds came at about 11:40 am, and they intensified throughout the remainder of the swim. They came from the southwest, and eventually I think they were coming from the west-by-southwest. Ultimately, they pushed up to 20-25 miles per hour; had they been coming from the north I’m pretty sure I would not have completed the swim. I guess an “armchair quarterback” could say “well, gee, it looks like the swimmer got helped out by the wind, isn’t that great?”. I did not feel that way. The winds continuously pushed me off course (to the east), so I often felt like I was swimming in a northwest direction to compensate for the wind-caused drift to the east. And as I got pushed further to the east, the wind was eventually coming directly at my left side.

The kayaks could not stay upright in the swell and chop (the swells were not like in the ocean: they had short intervals and they were steep, and the chop was very chaotic; whitecaps were in great supply). With the kayaks now unmanned and being towed by the boat, it was only the paddle boarder and I in the water for much of remaining 4 hours of the swim (the kayaks were re-deployed about 45 minutes before the finish of swim).

I was growing extremely exasperated by the constant chop, and the feeling that I was not getting anywhere. I felt like I was being blown into the east end of the lake (and I was), and that I wouldn’t be able to complete my intended swim route. I was getting seasick, and called for some Dramamine. At one feeding, I was told I had 1.4 miles left; then in 40 minutes at the next feeding, I was told I had .92 miles left. Oh! That was some bad news—to have covered only .48 miles in 40 minutes. My mind groaned, as I ciphered out that I could still be in the water for 65 minutes or more.

We slogged on. My body was becoming less horizontal in the water—more upright—and my arm strokes were becoming ever shorter and less effective. I was composing my account of the swim that I would give to friends when I got back home, to explain my failure to reach the finish. Namely, I thought, I’d say something like “…but you know… it’s the journey, not the destination, that’s important…”.

The kayaks came back in the water, joining me and the paddle board. We continued on, and then very unexpectedly, and suddenly, Chip, my paddle boarder, drew attention to a buoy about a dozen feet in front of me. He said that once I rounded that buoy, I could turn to the right, and it would be a straight 200 yards into shore. I could scarcely believe this turn of events, but upon rounding the buoy, I saw that it was true.

And so I made the shore. As I reverted to a terrestrial creature, getting my legs back underneath me, I performed that silly lurching crab-walk dance of open water swimmers, when they leave the water behind. I did my best to present myself to onlookers as though I, of course, had been in control for the entire swim. This thinly veiled performance, I’m sure, was seen as an obvious masquerade.

I covered the length of Lake Tahoe, 21.68 miles, in 14 hours and 51 minutes. My on-the-water support crew had kept the swim from deteriorating, even as the weather had turned so ugly. Their own significant and ongoing efforts were what allowed me to succeed in crossing the lake. And back on shore, I encountered my wife Lisa, and others, who had supported me so much throughout my training, as well as during the build-up to the swim, and on the day of the swim itself. I was happy, but mostly what I felt was great relief at completing the swim.

Lake Tahoe has much magic in it to impart to marathon swimmers. The water is fresh, the surrounding mountains are remarkable, and you may even see some snow on the higher peaks. This swim route is grand, and is deserving of much more attention by open water swimmers in the coming years. And, maybe one day soon, there will be a swimmer who will swim this route out-and-back – a double crossing—and they will have bragging rights on being the first swimmer to have accomplished this undertaking. Who will it be?

I know that in life it is our journeys, rather than our destinations, that largely define us and provide context and meaning for us. And yet. It is unequivocally the sweetest thing, to undertake an adventure like this, and to achieve the destination—the thing that you focused on and endeavored to reach, throughout the months of training, and the long hours of the swim itself. It is the destination, and it is the journey.

Traditional open water marathon swimming. There is nothing else like it, on earth.