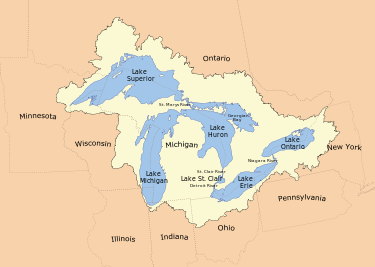 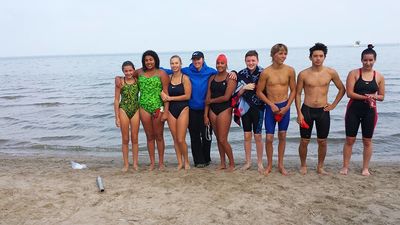 Lake Ontario (French: Lac Ontario) is one of the five Great Lakes of North America. It is bounded on the north and southwest by the Canadian province of Ontario, and on the south by the American state of New York. Ontario, Canada's most populous province, was named for the lake. In the Wyandot (Huron) language, ontarío means “Lake of Shining Waters”. It is the last in the Great Lakes chain and serves as the outlet to the Atlantic Ocean via the St. Lawrence River. Lake Ontario is also the only one of the five Great Lakes to not share a coast with the state of Michigan.

Lake Ontario is part of the Still Water Eight and home to L.O.S.T. Swimming (Lake Ontario Swim Team), an Open Water Swimming and Triathlon Team, located in Oakville, Ontario, Canada and established by Rob Kent. There is a 4.8 km L.O.S.T. Race held in mid-August.

Solo crossings of Lake Ontario are named as one of Canada's Top Open Water Swims and include the Traditional Route, the LOST Route, and the East End Route. There have also been a number of ultra long distance relays on Lake Ontario.

Lake Ontario is part of the Stillwater 8, a solo marathon swimming challenge created by Michelle Macy:

Trinity Arsenault's crossing of Lake Ontario is nominated for the 2014 World Open Water Swimming Performance of the Year.

"Canada seems to attract the young while creating heroines of the open water. From 16-year-old Marilyn Bell in 1954 to 14-year-old Annaleise Carr in 2012, Lake Ontario in particular is the marathon swimming Fountain of Youth. Where young Canadians can test themselves along an always dynamically turbulent 52 km (42-mile) traditional Marilyn Bell course from the mouth of the Niagara River to the Marilyn Bell Park in Toronto, Trinity Arsenault became the youngest person in history at the age of 14 years 61 days to successfully cross Lake Ontario. She took 24 hours 19 minutes in a north-to-south swim that required her to reverse directions twice in order to dodge oncoming thunderstorms. Arsenault raised money for the Canadian Tire Jumpstart Program that caters to underprivileged children. For her youthful enthusiasm to take on a challenging marathon swim and never give up despite having to purposefully swim off-course, for her efforts to raise money and awareness for kids who cannot afford to participate in athletic programs, for her successful crossing that replicated the swim that her mother swam in 2011, Trinity Arsenault’s Lake Ontario crossing is a worthy nominee for the 2014 World Open Water Swimming Performance of the Year."

Hosted by Dr. Marilyn Korzekwa, President of the Solo Swims of Ontario