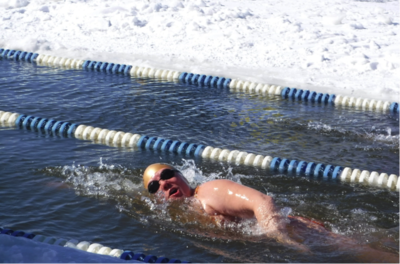 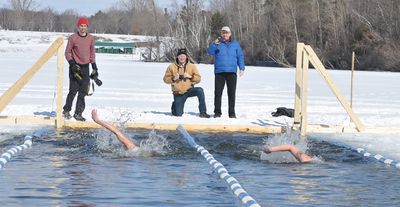 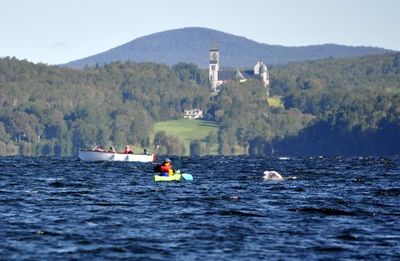 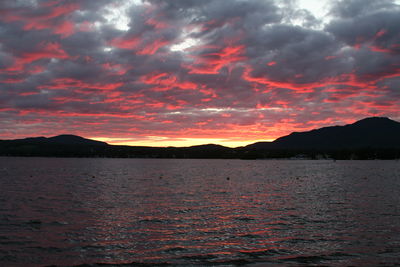 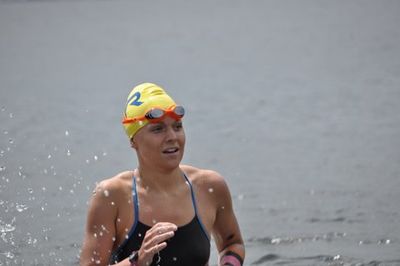 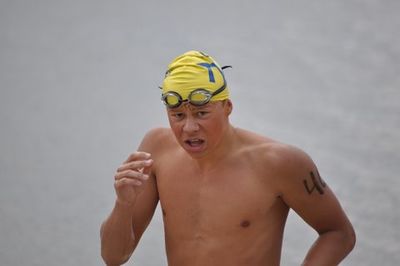 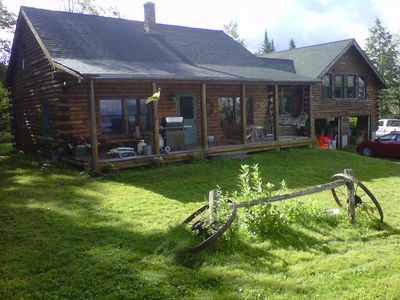 The Clubhous, headquarters for NEKOWSA on the shores of Lake Memphremagog in the state of Vermont

The lake is 27 miles (43 km) long with 73 percent of the lake's surface area in Quebec, where it drains into the Magog River. However, three-quarters of its watershed, 489 square miles (1,270 km2), is in Vermont. The total is 687 square miles (1,780 km2), with 198 square miles (510 km2) located in Quebec. In Vermont, the lake lies in parts of the towns of Derby and Newport, in addition to the city of Newport, all in Orleans County. In Quebec, the lake lies in parts of Austin, Magog, Ogden, Potton, Saint-Benoît-du-Lac, and Stanstead Township, all in Memphrémagog Regional County Municipality.

The lake elevation is 682 feet (208 m) and its maximum recorded depth is 285 feet (87 m) located near the international divide. The lake is the third deepest in Vermont. It contains 20 islands including Province Island, the largest which is divided by the international border, Black Island, Bell Island, and Cove Island.

The name Memphremagog is derived from Algonkian, in which it means "where there is a big expanse of water".

Memphremagog is site of La Traversée Internationale du Lac Memphrémagog, a professional and amateur swimming extravaganza in Magog, Quebec, Canada that is part of the FINA Open Water Swimming Grand Prix series, In Search of Memphre, an international amateur marathon swim between Newport, Vermont, U.S.A. and Magog, Quebec, Canada, and the World Open Water Swimming Association-sanctioned Kingdom Swim, the World 10-mile Swimming Championships, and the Son of a Swim. The La Traversée Internationale du Lac Memphrémagog is one of the World's Top 100 Open Water Swims.

Lac Memphrémagog is also part of the Triple Crown of Lake Monster Swims.

19-year-old William Francis O'Connor was the first person to complete a crossing of lac Memphrémagog. His swim on 21 August 1955 took 18 hours 35 minutes, swimming from south to north despite a storm that hit near midnight that caused him to take refuge near the side of the lake. O'Connor's swim was the inspiration for the Traversée Internationale du Lac Memphrémagog, a professional marathon swim started in 1979, a distance of 42 km between Prouty Beach, Newport (USA) and Pointe Merry in Magog, Quebec, Canada.

The lake is also the alleged inhabitance of Memphre, a cryptid possibly related to the Loch Ness Monster that inhabits Loch Ness in the Scottish Highlands. The two famous cyptids are similar to other cryptozoological lake monsters elsewhere in the world. It is understood by believers that Memphre represents a line of long-surviving plesiosaurs.

The Island Pond Swim is a 3-mile open water swimming competition in Lake Memphremagog from Brighton State Park Beach around The Island in the state of Vermont. The event is part of the Swim The Kingdom event organized by Phil White of the Northeast Kingdom Open Water Swimming Association (NEKOWSA).