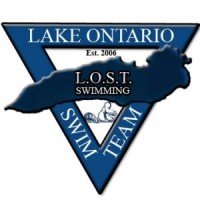 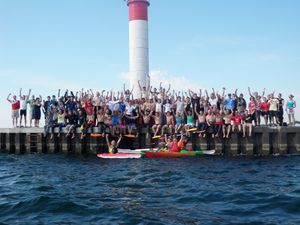 LOSTies are members of L.O.S.T. Swimming.

L.O.S.T. is nominated for the 2014 WOWSA Awards' World Open Water Swimming Offering of the Year.

The nomination for L.O.S.T. Swimming (Lake Ontario Swim Team) by Rob Kent reads, "L.O.S.T. Swimming has established its much-appreciated niche and found its way in Lake Ontario] and throughout many far-flung venues around the world. The brainchild of endurance athlete Rob Kent, the Lake Ontario Swim Team has grown rapidly to accept athletes from all backgrounds and persuasions, ranging from bioprene to neoprene, as well as instigating and inspiring the new and popular Canadian Open Water Swim Series. From organizing and encouraging long, tough solo marathon swims across Lake Ontario between America and Canada to offering frequent training sessions for triathletes and newcomers, Kent and his like-minded enthusiastic colleagues at L.O.S.T. make open water swimming fun and enjoyable, inviting and attainable, cool and respectable. For his sense of inclusion, for his relentless encouragement of all things open water, for his motivational newsletter and educational website, L.O.S.T. Swimming is a worthy nominee for the 2014 World Open Water Swimming Offering of the Year."

Rob Kent started the group in 2006 while training for his English Channel attempt. After doing all of his open water training for the English Channel in Lake Ontario, Kent realized what many great swimmers from by-gone eras once knew that Lake Ontario is a great place to swim. In an effort to try and bring back open water swimming to one of the most famous open bodies of water, Kent started LOST Swimming.

L.O.S.T. Swimming started with a handful of triathletes, Madhu Nagaraja, a successful English Channel swimmer, Kent and his family, all swimmers. In the summer of 2007, after his English Channel attempt, it wasn’t called “LOST Swimming”, as one of the originals put it, it was called “let’s meet at the lighthouse and go for a swim”. But gradually, word of mouth spread and the group grew. By the third summer, in 2008, the group was up to about 25 people and with just a week’s notice it was decided that there should be a race… and the ‘LOST Race’ was born. Although only 8 people were in the first LOST Race, it was a lot of fun and it was decided that it would become an annual race. The race started (and still does) from the foot of Maple Grove Drive for 3.8 km to the Lighthouse Pier in downtown Oakville. It is challenging distance and equals to the swim portion of an Ironman triathlon. The course is a safe and very scenic swim as it goes parallel to the shore, past dozens of multi-million dollar homes in one of Canada’s most beautiful and affluent neighborhoods, South-east Oakville.

Word continued to spread and by 2011 LOST had become a registered Masters swimming team, with over 145 paid members, over 300 people receiving the weekly mailing and the LOST Race now had grown to 85 swimmers. The average Saturday morning swim had now reached as many as 52 swimmers and has had visitors from all over the US and the UK. The LOST season runs from early June to mid-September.

LOST has grown to include the LOST Travel Team, which has had LOST swimmers swim in the Tampa Bay Marathon Swim, the FKCC Swim Around Key West, the Manhattan Island Marathon Swim, the Governor's Island Swim, the 25 km U.S. Masters Swimming National Championship, and the Ederle Swim.

Rob will also attempt to become the second LOST Swimmer to complete a Lake Ontario Crossing. Melanie Price was the first in 2011. Price also established the LOST Route, which goes from Port Dalhousie to Oakville, and is exactly the same distance as a running marathon, 42.2 km or 26.2 miles.

How To Join LOST Swimming

1) It costs $35 + $5 = $40 per calendar year. Insurance through Masters Swimming Ontario costs $35, and $5 is the bare minimum I need to run this club. If you are already a current member of MSO number, you don’t need to pay the $35, just provide the number… then it’s just $5. It is more important to see the sport grow than worry about making a couple bucks. It doesn’t mean it’s only worth $5 bucks. It’s just a good deal. Although we can’t offer it free anymore, at least we do have insurance that covers you in case anything were to happen… not that it will! I still like the idea of keeping it friendly and casual… as “grass roots” as possible. Just a bunch of friends going out for a swim in the lake. Call me a hippie.

2) You need to fill out the Registration Form and send it and the cheque in. Just click here for the form and details: REGISTRATION FORM Don’t make me be the bad guy and turn anyone away… we need to have you registered before you can swim!!! The easiest way is if you mail the form and cheque in to Melanie… but you will also be able to register and pay on the beach, if need be. Just show up early.

3) We meet every Saturday morning at 8:00 am from early June until late September. We meet at the foot of Navy Street, by the Lighthouse Pier, at the mouth of 16 Mile Creek in downtown Oakville. (Don’t worry we’re easy to find, we’re the ones walking around the park in wetsuits and bathing suits… just show up!)

a) The key rule here is that we swim parallel to the shore and not too far out. So if you have a problem (cramp, tired, cold, etc) you simply swim directly into shore.

b) Swim with others. We usually have enough people out there of various speeds that there is always someone about the same speed as you.

c) You are on your own. Generally speaking, you should be able to swim about 500 meters without much problem, which is 20 lengths of a 25 meter pool. We encourage newbies to come out, but you should have a base level of ability as this is a swimming club and not swimming lessons. As much as we all try to look out for each other and help each other, you are on your own and are ultimately responsible for yourself! No one is going to tell you that you are too tired, or too cold, or the water is too rough for you… you have to know your limits, your body and the water conditions… be aware of yourself and your environment… and both are continually changing!!!

We’ve had no incidents at all so far, but that is because we look out for each other… and more importantly, because everyone looks out for themselves!

5) We swim out and back, parallel to the shore, for a given amount of time, rather than distance. For example, there may be a couple of groups, one that goes 15 minutes out and 15 minutes back and another that goes 35 minutes out and 35 minutes back. Take note of who and how many are in your group, so we can make sure everyone gets back safely. If you are going shorter or get out early… be sure to tell someone, so we aren’t looking for you.

6) Equipment: a bathing suit, goggles, a swim cap (you can buy a LOST Cap for $5), a wetsuit (optional if you are true open water swimmer), some Body Glide for chaffing from the wetsuit (another reason you don’t need a wetsuit), warm clothes for after. And that’s about it.

8 ) Don’t be a chicken. It is often cold (55ºF/13ºC to 75ºF)/24ºC) but you can wear a wetsuit if you need to. And, yes, there is stuff in Lake O that you won’t find at the bottom of the pool (like lane lines and hairballs!)… but don’t let it freak you out… it is a very clean lake and we are swimming along one of the most beautiful shorelines in Canada! Once you get used to it you’ll find that open water swimming is to pool swimming, what trail running is to treadmill running! It’s great.

9) Bring a friend. Lake O is one of the best open bodies of water in the world… really, in the entire world… for open water swimming. It has a spectacular history of open water swims, from Marilyn Bell, George Young, Abou Heif, Ted Erikson, and the great races they used to hold at the Toronto Exhibition to Vicki Keith’s amazing swim across doing butterfly! We have a great lake to swim in… tell people about it and bring them down to watch or even better, to swim! The more the merrier.