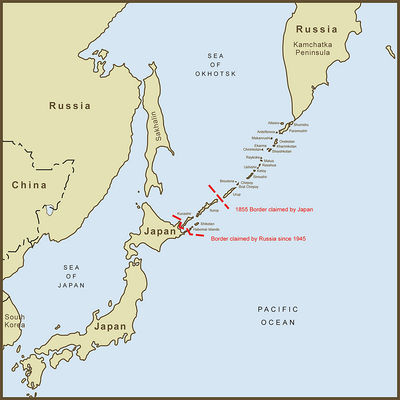 Kuril Islands between Russia and Japan

Kunashiri Island (Russian: Кунаши́р; Japanese: 国後島, Kunashiri-tō; Ainu: クナシㇼ or クナシㇽ, Kunasir), possibly meaning Black Island or Grass Island in Ainu, is the southernmost island of the Kuril Islands, which are controlled by Russia, but four of which (among them Kunashiri Island) are claimed by Japan (see Kuril Islands dispute). It lies between the straits of Kunashiri Island, Catherine, Izmena, and South Kuril. Kunashiri Island is visible from the nearby Japanese island of Hokkaidō, from which it is separated by the Nemuro Strait.

Kunashiri Island is formed by four volcanoes which were separate islands but have since joined together by low-lying areas with lakes and hot springs. All these volcanoes are still active: Tyatya (1,819 m), Smirnov, Mendeleev (Rausu-yama), and Golovnin (Tomari-yama). The island is made up of volcanic and crystalline rocks. The climate is humid continental with very heavy precipitation especially in the autumn and a strong seasonal lag with maximum temperatures in August and September. The vegetation mostly consists of spruce, pine, fir, and mixed deciduous forests with lianas and Kuril bamboo underbrush. The mountains are covered with birch and Siberian Dwarf Pine scrub, herbaceous flowers or bare rocks.

Steven Munatones plans to swim from Kunashiri Island to the Nemuro Peninsula on Hokkaido, Japan first proposed in 1988.