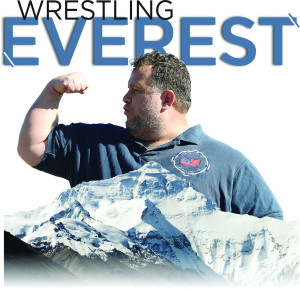 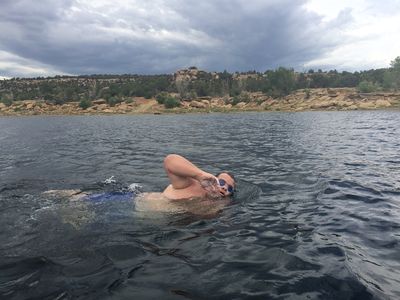 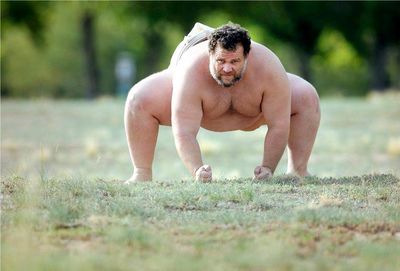 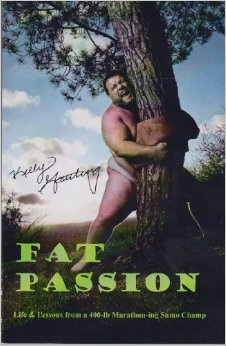 Kelly Leo Gneiting is a 6-foot, 200 kg (430-pound) American sumo wrestler, author, and marathon runner from Rexburg, Idaho. He is known as the Man of Fat Steel and is the five-time U.S. Sumo Champion, 11-time U.S. representative and coach at World Sumo Championships, has run 3 marathons.

He wrote a book called Fat Passion as well as The Book of Mormon's Art of War, That Ye May Marvel, the 7 Epoch Shifts in Civilization's Destiny with Will Christensen, The Bosoko Journey, Joey and Pepper and the King of Japan, The Legend of Grandpa's Christmas Gift: And Three Other Short Stories, and The Man on the Other End of the Phone.

Kelly Gneiting (U.S.A.) Sumo Swimmer
Kelly Gneiting certainly pulled the most amount of any open water swim this year during his 22-mile (35.4 km) solo swim across Navajo Lake from New Mexico to Colorado in 22 hours 46 minutes. The 200 kg (440 lbs.) sumo wrestler now has done both a marathon run and a marathon swim. He trained over 200 hours swimming over 200 miles to prepare his oversized body to tackle his latest challenge despite having bronchitis and experiencing searing pain from an injured ankle. For gutting out the last 320 meters over an agonizing 3 hours, for training months on end for a goal seemingly out of his wheelhouse, and for being the heaviest person to complete an ultra-marathon swim, Kelly Gneiting's Navajo Lake swim is a worthy nominee for the 2015 World Open Water Swimming Performance of the Year.