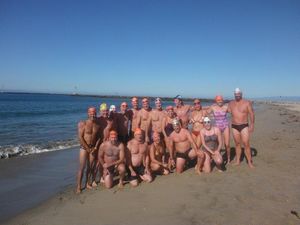 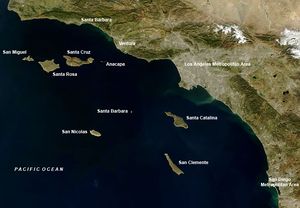 Solo and relay swims between Anacapa Island and the California mainland are governed by the Santa Barbara Channel Swimming Association (SBCSA) that supports and sanctions open water swims to, from, and between 7 of the 8 Channel Islands off the coast of Southern California, USA.

12.4 miles (10.8 nm) to Silver Strand Beach, Oxnard. Cindy Cleveland pioneered this swim in 1978 in a 12 hour 48 minute double-crossing - a record that still stands. Since then there have been 36 total solo crossings to date (October 2012), including a double crossing by Paul Lewis. There have been 3 successful relays by Team Jessie, Team Augie and Team Coto.