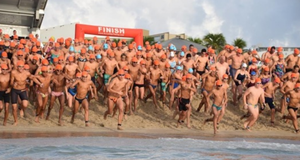 Jesús David "Jesse" Vassallo Anadón (born 9 August 1961) is a Puerto Rican former swimmer and world record-holder who competed at the 1984 Olympic Games for the United States. In 1997, he became the first Puerto Rican to be inducted into the International Swimming Hall of Fame.[1] From 2004 to 2009, he served as the president of the Puerto Rican National Swimming Federation (Federación Puertorriqueña de Natación.

Vassallo won his first USA Swimming national title and a national gold medal in the 1,500-meter freestyle in 1976. In 1977, Vassallo traveled with the USA Swimming national team, winning medals in New Zealand, the Netherlands and France. In 1978, Vassallo broke his first world record in the 400-meter trials for the 1978 World Championships in Berlin, Germany where he won two gold medals and a silver medal. In 1979, Vassallo broke his third world record in the 200-meter indvidual medley and won a gold medal in the 1979 Pan American Games in San Juan. Vassallo's experiences in the 1979 Games were highlighted in the 1980 documentary A Step Away. Also in 1979, he graduated from high school and was placed in the list of the top ten athletes in the world, along with Muhammad Ali, Mario Andretti and others by Sports Illustrated magazine.

Vassallo was unable to attend the 1980 Moscow Olympics because of the boycott imposed by U.S. President Jimmy Carter. He swam faster in the 200- and 400-meter individual medley events at a domestic competition held at the same time as the Moscow Olympics than the two gold medalists in Moscow.

He is now a coach and developed the D-Band, a device used by pool swimmers.