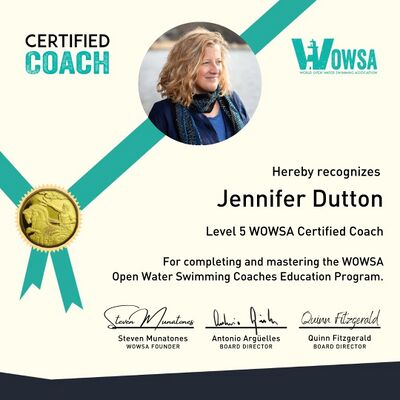 Jennifer Dutton is a 52-year-old American open water swimmer and swimming coach from Wayland, Massachusetts. She was inducted in the Class of 2019 in the Vermont Open Water Swimming Hall of Fame.

Jennifer Dutton, 49 of Boston, Massachusetts is a marathon swimmer who has been marathon swimming since she was a teenager. With a 30-year career, she is both a veteran and trail blazer in the sport. She did her first 10-mile swim in Candlewood Lake,CT while she was still in high school and shows no signs of slowing down. Dutton is a long-time participant in the annual NEOWSA Kingdom 10-Mile Swim. In 2012, she completed In Search of Memphre swimming the 25-mile length of Lake Memphremagog in just over 15 hours. Since then, Dutton has completed several 25 km Border Buster swims in Lake Memphremagog, Vermont and has been a fixture on the long distance open water scene in New England and beyond, completing several impressive swims in excess of 30 miles, including an unprecedented 34-mile ABC swim of Lake Keuka in upstate New York. Dutton has completed spectacular swims: first across Torch Lake in Michigan, a gutsy crossing of Lake Tahoe, solo Lake George, a 32 mile swim in Great Sacandaga Lake and many others. She does it for herself, not for accolades and with a quiet authority. Dutton also has a deeply personal connection to Vermont. She has family living near St. Johnsbury, and she makes regular visits to the state to swim and visit. Dutton also leads as one of the best high school swimming coaches in New England and as a masterful masters swimming coach freely and quietly sharing her love and devotion to the water with many other people helping dozens of other swimmers achieve great things in Vermont waters and beyond.

She was nominated for the 2021 World Open Water Swimming Performance of the Year Award. The winners and nominees included: