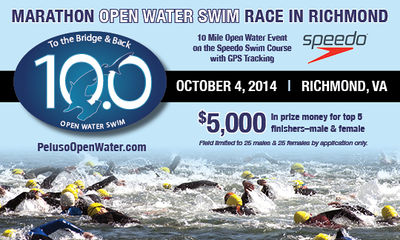 To the Bridge & Back, a 10-mile professional open water swim organized by Jay Peluso 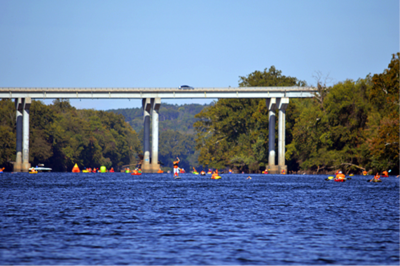 The To the Bridge & Back, a professional 10-mile open water swim organized by Jay Peluso in Virginia

Jay Peluso is the founder and head coach of Peluso Open Water and the IGNITE SwimRun race series owner. He was a two-time All-American swimmer at the University of Massachusetts. He graduated with a degree in Sport Management where he was a standout in Swimming and Water Polo. He earned his law degree from the University of Richmond in 1996 and was inducted into the Rhode Island Aquatics Hall of Fame in 2004. During his swimming career at UMass, Peluso was a multiple school record holder and seven time New England Champion.

Peluso is an active member of the Richmond Triathlon Club having served a 5-year term as Chairman of the Board of Directors and currently serves as race director and legal counsel for the non-profit corporation.

Peluso also organizes the To the Bridge & Back, a 10-mile professional marathon swim where only 25 men and 25 women are invited to the competition held in the Upper James River in Virginia.

HCA, Va. Open H2O Race Series Cold Water, Fast Current - 1500m, 2-loop out and back course held on 19 April 2014. This early season event historically features water in the mid-60's and a strong river current. Athletes swim against the current for 375m then enjoy the fun, fast ride back x 2. The greek yogurt bar and mimosas are your reward.

HCA, Va. Open H2O Race Series - Glow Swim (night racing) - 500m per heat (muti-heat racing) held on 23 August 2014. Racing for this event is done at night in heats of 10 swimmers, fastest times will advance to the semis and then the finals. Kayaks, SUP's, Buoys, and swimmers are decked out in glow material. Spectator views are amazing and the 80's dance party will pump you up for racing.