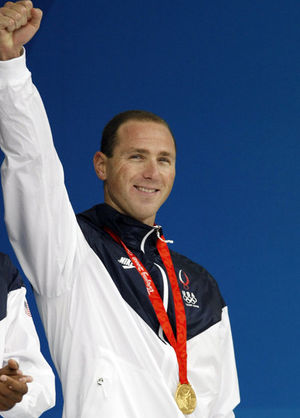 Jason Edward Lezak (born 12 November 1975) is an American swimmer who is a four-time Olympic gold medalist. He also set long-course world records with his teammates in the 400m freestyle and medley relays, and is a former American record holder in the 100m freestyle.

He serves as a General Manager of the Cali Condors in the new International Swimming League.

Lezak earned his first long-course international swimming gold medal at the 2000 Olympics where he was part of the 4×100-meter medley relay. He also won a silver medal in the 4×100-meter freestyle relay.

At the 2008 Olympics, Lezak was the oldest male on the U.S. swim team. He anchored the 4×100-meter freestyle relay team that won the gold medal and set a new world record. In the final 25 meters, Lezak overtook French team anchor Alain Bernard (the world record holder in the 100-meter freestyle going into the relay) to win gold despite Bernard having nearly a full body length's advantage when Lezak started his leg and half a body length with 25 meters from the end. Lezak split a 46.06, the fastest 100-meter freestyle split in history. The final time of the American team was 3:08:24, which was 3.99 seconds faster than the previous world record; the French team finished second at 3:08.32, eight one-hundredths (0.08) of a second behind—the closest finish in the event's history. This was a crucial race for Michael Phelps, because he needed it to complete the goal of winning eight gold medals in a single Olympic Games, breaking Mark Spitz's record of seven gold medals at the 1972 Olympic Games.

Lezak also earned his first individual Olympic medal, having tied for the bronze with César Cielo Filho in the 100-meter freestyle with a time of 47.67. He anchored the 4×100-meter medley relay to give U.S. team the title, which was also Phelps's record-setting eighth gold medal of the Beijing Games.

Lezak won a silver in the 4x100-meter freestyle relay in London.

The International Swimming League (ISL) is a professional pool swimming league for elite swimmers founded by Konstantin Grigorishin. The ISL hosts a series of U.S. and European-based competitions that will culminate in a 2019 global championship at the Mandalay Bay Events Center in Las Vegas, Nevada, U.S.A.