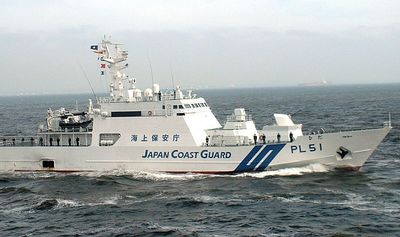 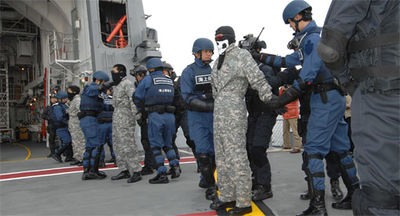 noun - The Japan Coast Guard (or JCG or 海上保安庁 in Japanese, formerly called the Maritime Safety Agency, is the Japanese coast guard that employs about 12,000 personnel under the oversight of the Ministry of Land, Infrastructure, Transport and Tourism. It is responsible for the protection the coast lines of Japan. The Japan Coast Guard also oversees and approves crossings of the Tsugaru Channel by swimmers attempting crossings under the Tsugaru Channel Swimming Association and Ocean-navi.

The duty of the JCG is to ensure security and safety at sea through the following services:

The Japan Coast Guard Academy is a 4-year-training institution, located in Kure, Hiroshima prefecture, established within the Coast Guard for the purpose of training students to become officers. Graduates are given a bachelor's degree upon graduation. About 40 cadets graduate from the academy each year. The JCG also maintains two special forces units: the Special Security Team (SST) (特殊警備隊) and the Special Rescue Team (SRT) (特殊救難隊).

Headquartered in Tokyo, the JCG has divided the nation into eleven regions to facilitate its coast guard operations. Each region maintains a Regional Coast Guard Headquarters, under which there are various Coast Guard Offices, Coast Guard Stations, Air Stations, Hydrographic Observatory, and Traffic Advisory Service Centers.