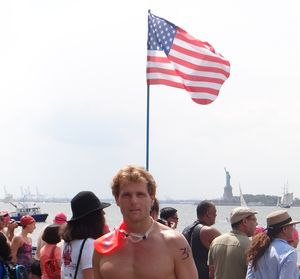 Jake Bright is a New York City based professional and avid open water competitor. In addition to competing in OWS and aquathlon, he writes selectively on outdoor sports.

Bright began recreational open water competition in 2007, with the Fran Schnarr Memorial 5K and NYC Swim program. In his first race he got lost in the Long Island Sound and had to ask a fishing boat for directions, before finishing two hours later. He’s since competed in over 30 open water races and aquathlons (swim/run) in distances up to 10K. Bright trains at Asphalt Green and with CIBBOWS and has received frequent guidance from Total Immersion founder Terry Laughlin. OWS related highlights to date:

Bright writes selectively on outdoor sports and in 2010 published his own “Cliffs Notes” article on open water swimming for Swimming World Magazine. He has also completed interviews with Terry Laughlin and Olympic medalist Lia Neal.

In addition to swimming and aquathlons, Bright’s “hardwater” sport is alpine skiing. He does backcountry and races in USSA Masters, local race leagues, and is a repeat competitor and medalist at NASTAR Nationals' ski championship. He has published regularly on ski racing and alpine culture.

Professionally Bright is a writer, speaker, and author. He publishes as a contributing editor and independently, primarily on global business, finance, and tech. His first book The Next Africa released with Macmillan Publishing in 2015. Bright is a Whitehead Fellow of the Foreign Policy Association and producer, moderator, and speaker in various forums. Jake is a graduate of Michigan State and Columbia Universities.