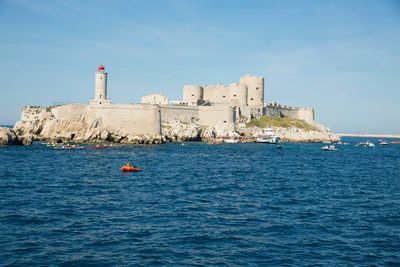 Le Château d’If of the island of If, start of the Défi de Monte Cristo open water swim and one of the Prison Island Swims in Marseille, France

Île d’If is the smallest island in the Frioul archipelago situated in the Mediterranean Sea about a mile offshore in the Bay of Marseille in southeastern France where Le Château d’If, a fortress and later a prison, is located.

If is site of one of the 8 open water swims of the Octad of Open Water Swims or Prison Island Swims that includes the following open water swims around formerly well-guarded isolated prison islands. Robben Island, Alcatraz Island, Spike Island and Rottnest Island are now 21st century sites better known for challenging open water swims with tricky currents and surrounding marine life. Convicts of the past have given way to contemporary open water swimming traditionalists and wetsuit-clad triathletes and swimmers.