Gus Ryder, CM is an inductee (Honor Coach) in the International Marathon Swimming Hall of Fame 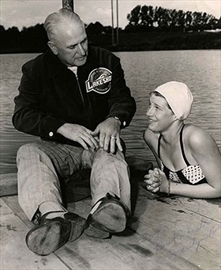 Gus Ryder, CM was inducted in the International Marathon Swimming Hall of Fame (IMSHOF) in 1981 as an Honour Coach from Canada. Ryder was an innovative coach whose athletes achieved national and international success as marathon swimmers including Marilyn Bell and Cliff Lumsdon. He founded Lakeshore Swimming Club in 1930 and was named Canada’s Man of the Year in 1955 and was named to the Order of Canada in 1975 for his work teaching disabled children.