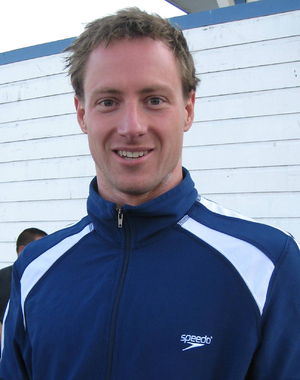 Gregory Whitman is an aspiring physician studying medicine at Sydney University (Australia) and an American open water swimmer who was also formerly a Legislative Aide in the State of New Hampshire Senate. Whitman competes in many open water swims from the East Coast of the United States to Australia.

As an Assistant to State Senator Fuller Clark in the State of New Hampshire in the United States, Whitman helped push through a remarkable legislative bill through the state government. The new law in New Hampshire significantly enhanced the awareness and safety of open water swimmers by giving them the right-of-way while swimming in open bodies of water anywhere in New Hampshire.

Whitman reports, "Regarding a bill before the New Hampshire legislature to give swimmers the right of way in open bodies of water, I worked hard testifying in support of this legislation. On April 14th 2010, the bill has passed the House. Having already passed the Senate, all [the bill] needs in order to become law is the Governor's signature."

ANALYSIS: This bill gives swimmers and kayakers the right of way on water.

STATE OF NEW HAMPSHIRE, In the Year of Our Lord Two Thousand Ten, AN ACT relative to giving swimmers and kayakers the right of way. Be it Enacted by the Senate and House of Representatives in General Court convened:

Sid Cassidy said of the approved bill, "My belief is that this is simple logic that should absolutely be applied worldwide."

Steven Munatones agreed, The approved bill and its purpose does make perfect sense and is truly a tribute to the efforts and vision of Greg Whitman and his political supporters and politicians in the state of New Hampshire. While the basic navigation rules for who has right of way on the water are meant to keep everyone on the water safe, it is a strong indication of the growing number of open water swimmers when these rules are formalized and address the needs and safety of open water swimmers."

On 1 January 2011, the bill was enacted and a new day dawned for open water swimmers enjoying the sport in the State of New Hampshire.

The state slogan, "You're going to love it here," really makes sense for swimmers in New Hampshire.

This Wednesday, the New Hampshire Legislature passed legislation to provide the right-of-way to swimmers in the open water.

This reasonable, yet intriguing, act of a political body to recognize the needs of swimmers in the open water when they encounter boats, Jetskiers, water-skiing, windsurfers, ferries and other watercraft was the result of efforts of many people, including passionate open water swimming coach Greg Whitman.

"During my work as a legislative aide for the New Hampshire Senate, this legislation was brought to my attention. I but became involved with it on a personal level based on my passion for open water swimming. I am involved in swimming at all levels," explained Greg. "The Senate passed the bill in January and the House passed it on Wednesday, completing its journey through the two bodies." We asked Greg about the political background of this groundbreaking legislation.

Daily News: What prompted you to work towards this legislative bill?

Greg: I first became involved with open water swimming while attending the University of Kansas in the 1990s. At the time, Coach Kempf conducted a significant number of our early season practices at Lonestar Reservoir and Clinton Reservoir. After graduation, I embarked on a career as a collegiate swim coach serving as an assistant at Southern Illinois University's under long-time USA Swimming national open water swimming coach Rick Walker. Having been a resident of New Hampshire for the past few years, I have the pleasure of enjoying the beautiful lakes New Hampshire. For example, Squam Lake and Newfound Lake are both pristine and epitomize the natural beauty of New Hampshire. Squam Lake is dotted with islands that make great destinations for open water swimming adventures. Squam Lake is a large lake that is shared with all types of open water enthusiast, including kayakers canoeists, boaters (motorized/nonmotorized) and swimmers. The importance of this bill to insure the enjoyment and safety of all cannot be stressed enough.

Daily News: What state senators and representatives were most helpful?

Daily News: What were some of the political or legislative obstacles?

Greg: I can rarely say this, but none. This bill was surprisingly easy to get through both bodies of the legislature. I believe this speaks to the character of the people of New Hampshire, as New Hampshire is truly a state dedicated to the outdoor lifestyle.

Daily News: Was there any resistance for other constituencies?

Greg: No, one other group came and testified.

Daily News: What are the chances of being signed into law by the Governor?

Daily News: What other plans do you have to help the open water swimming community?

Greg: I will always be an ambassador of the sport. I am hopeful this legislation can be used as model legislation in other states.